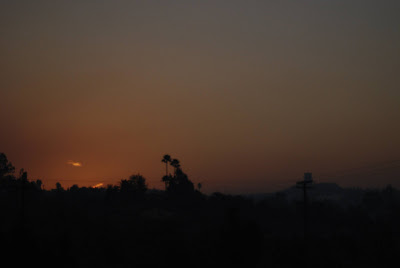 It's the Boy's birthday next week. I still haven't decided where or how we're going to celebrate. Oh, I know some things. I know who he wants to be there, I know I am sewing a Jedi costume as a gift, and he wants a cake with a picture of a Jedi on it, in icing. [Cue maniacal laughter.]

But when, and where are still to be decided.

It started when I spoke to a friend at church last week.

"If you want to come to [her son's] birthday I think we're just going to the park nearby next week after church. I don't want to plan anything since last year he was born in the middle of a wild fire and I'm worried it will happen again."

She literally went in to the birth center on a normal day, and came out with a newborn wondering what on earth had happened.

That got me thinking as I tried to finalize plans for the Boy's party. Last year we had to celebrate on the road. We evacuated twice. Once to my in laws, and the next day from there to my husband's grandparents. We celebrated his birthday in the great grandparent's house while daddy and the uncles stayed behind to protect the family property.

I looked at the still barren hills near lake Hodges on the way home from church where they are just now rebuilding homes and I asked myself, "Will it happen again? Should I bother making plans?"

As I was pondering these things, lo and behold, Camp Pendleton burst into flames yesterday. We all wondered where it was coming from as we stood at the playground staring west at the smoke, and speculating.

So I have given up. On October 23, at an undisclosed place, and an undisclosed time, perhaps in an evacuation center, we will be celebrating the Boy turning 7. Everyone is invited who can make it. If we are near a kitchen I will try making cake. If we can get to our church's big Masquerade Madness party that weekend, if the freeways are open and there is no fire in the way, that will be really fun, we'll pretend it's all for his party.

Seriously, what would you do?
life with short people story of my life