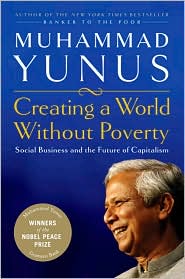 This is probably one of the most important books I've ever read. How's that for a catchy opening sentence. But it's true.

If you don't know who Muhammad Yunus is here is the quick version. He's from Bangladesh, he invented micro credit, or at least figured out how to make it work in this century, he and Grameen Bank won a Nobel Peace Prize because of it.

He tells one story about how he became a banker to the poor. He met a woman named Sufiya. All day she would work to make bamboo stools to provide food for her family, but no matter how hard she worked she was never able to get out of poverty. He could not understand it, but as they spoke he learned that it was because of corrupt money lenders. In order to get the bamboo to make the stools she had to borrow money from a money lender. He would only lend her money on the condition that she only sell her wares to him, at the price he set. It was essentially slave labor, a cycle of servitude she would never escape on her own because there was no other form of credit available to her.

Yunus approached banks, but no bank was interested in making $30 loans or less to the poor, even after he proved that they would repay their loans. There was no profit in it. So he ended up starting Grameen Bank, a bank whose entire clientelle is made of the extremely poor. You can read the rest of the story for yourself.

In this book Yunus goes beyond the idea of micro credit and tackles capitalism and the idea of social business. In a nutshell, he believes there is potential for business that are run, not with maximizing profit as their bottom line directive, but a bottom line of achieving a positive social outcome. It is a business not a charity. It keeps good records, it may make a profit, but it is not profit driven. Investors would receive their initial investment back after a certain period of time, but not profits. They would continue to own the company and have a say in it, but it would not exist put to money in the owner's pockets, but to achieve a goal that is agreed upon in the beginning, such as providing affordable food in rural villages.

It's worth reading just for his analysis of money lending in the US and the health care system, even if you never intend to do something in the third world. Imagine an insurance provider whose bottom line was affordable health care for all rather than make the shareholders more money. Imagine a company run as efficiently as a profit maximizing corporation but with the intent to make things affordable for people instead of finding reasons why they shouldn't have to pay out on insurance claims. Wouldn't that be something?

If you are at all interested in issues of social justice, poverty, economic disparity, or just helping people in need, I highly recommend this book. It may change the way you think about such things for the better.

The rice milling business we are looking to start in the village is based on a this model.

I'll leave you with what is perhaps my favorite sentence from the book. Right in the last chapter, see I read the whole thing, talking about poverty he says,

Poverty exists because of these intellectual failures[concepts that are too narrow and accept the idea of poverty]rather than because of any lack of capability on the part of people.

random musings recommended reading so do something about it