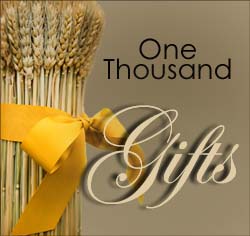 Some friends of ours had a baby just a few weeks ago. He was born 3 weeks early and had a hole in his left lung. By the time he was a few hours old he had tubes in his chest to relieve the pressure on his chest cavity, an oxygen tube down his throat and wires sticking out of him everywhere. Thankfully, we have one of the best NICU wards in the country nearby and he was transferred there the first day.
He is now home with his family. The tubes are all gone, he's breathing on his own, the danger has passed. I can't begin to describe how thankful I am that it turned out his way. Which is only a portion of how his parents must feel.

It occurs to me, belatedly, to be thankful that Little was so very healthy when she was born, also 3 weeks early. I just took for granted how strong she was, how perfect. But now I give thanks that she was as she was, and not put through such trauma.

And the list of things, smaller, but no less worthy of rejoicing over goes on.

An e-mail from a dear friend, full of love and faith and hope.

The Genius Husband loves me. He knows me, all my quirks and weaknesses, and he still smiles that smile at me that makes my heart flutter, the one that tells me he likes me. That another person can know me and still like is is a little bit of a wonder to me. I still can't fully comprehend that idea that God knows me better, and loves me even more.

Time to just be with the Girl this week, and enjoy her.

My children still want me to be part of their day, their activities. They are always calling, "Look mom, look at what I can do, what I did." Too soon, they won't want me like that anymore. I"m trying to enjoy it instead of brush them off.

Every night when I tuck him in the Boy kisses me on both cheeks, then my forehead, and then each hand. And then he holds my head in a death grip and does it again, and again, and again until I tickle him to make him stop.

The way Little says, "Yeayuzsh!" (That's yes for those who don't speak Little) Very seriously, and with great significance when asked a question.

The gratitude community is here.
I want to remember One Thousand Gifts