October 31, 2009
This past week, including tonight, I have seen or heard at least 10 small children crying as they stand outside my apartment. They are fixed in place, staring upward at the window above my front door. The one belonging to my upstairs neighbors. They look like they're going to pee their pants they're so scared and yet they can't look away, and they cry in that panicked sort of way that small children do when their frightened.

This is what they are looking at. 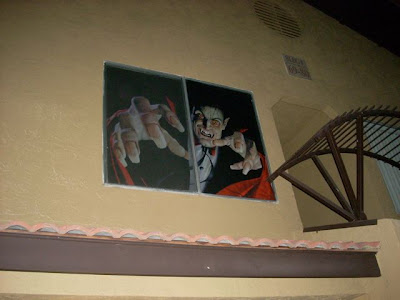 To be fair, I have heard a lot of older kids yelling, "Hey, that's really cool!"

But I don't think it makes up for all the scared little kids.

This is what I hate about Halloween. Most of the year we have a choice about what our children are exposed to, and what we expose ourselves to. But from Sept. 1 to the end of October, we have shoved into our faces, every where we go, images of death and terror. More importantly, our children who have no filters and categories yet for this kind of thing, have it shoved in their faces too.

But even if you don't take them trick or treating to scary places, in October a simple walk to the playground can become a terrifying experience for a child, as evidenced by all those I have seen standing outside staring and crying.

I used to object because of the fear that it originated from. If you believe the spirits of the dead can come out and harass you on this night then you darken your home to make it unattractive, dress yourself as a ghost to blend in with all of the real ones and take to the streets of your village to avoid being home when they try to enter. You give money and food away to those who come threatening menace if you don't. You carve a turnip to look like a human skull and place a candle in it to trick the spirits who require human sacrifice into thinking it's already been done.

These are grisly things, and evil. But I could forget about that, since that's not what it's about these days, or so they say. Now it's about the kids, and the candy, and meeting your neighbors. Except when it's not. Fear, and frightening people is still very much the point, however much it's supposed to be the kind that you can laugh off. It's on those grounds that I still object. It's still a night of mischief, it still celebrates fear and death. And it still rubs your face in it in an inescapable way.

What to do with my objection still remains a bit of a puzzle.

There are those who respond to the day by avoiding it altogether, and hide in the back of the house with their lights out.

In response to them is the group who believe that being neighborly and joining in is more important and loving. I think they have a point, but I want to ask them what it is they do on the other 364 days of the year. It's not like you can't cross the street, knock on the door and say, "I made an extra dozen cookies today, would you like some?" on any given Wednesday afternoon.

That's the idea that I find the most compelling. Instead of joining in on a gimme or else night, if we want to care about our neighbors, we can voluntarily give out of love on a consistent basis. Why not invite our neighbors into our homes for a non-scary time of fun?

I like what our church did this year. They held a costume party. Scary costumes were discouraged. There was a climbing wall, bouncers, music, an all you can eat taco stand, and tons of games with prizes for the kids to play. In a way it's silly. Because it's another form of hiding. Everyone go and congregate together and have fun and avoid all those other people who are indulging in the scare factor. But it's also an alternate place to invite people to go, especially for those who aren't sure about opening up their own homes yet.

I have a friend at church who started a non-profit in downtown San Diego that helps refugee families get on their feet once they arrive. They give away furniture, clothes, and toys. They open their doors to let the kids come in and play while their parents find items they need to start life over again. She brought about 50 of those children, and some parents to our church party tonight. Kids from Somalia, Bhutan, and Burma. They had so much fun. There was not a person who could keep from smiling as they shrieked, ran, climbed, ate, won all the games, and paraded their makeshift costumes around.

Would that inviting people in could always be that rewarding.

As you can tell, I'm trying to discover how to take my objection to something that isn't likely to change just because I object to it and turn it into an action, or series of actions, that subverts the dark intent of Halloween. I'm just not sure yet what that is.
random musings this life together thing