The First Sunday of Advent

November 29, 2009
I've been planning to keep advent for most of the year, but last night I was putting together a wreath at just before midnight. (It crept up on me. I had no idea it started so soon after Thanksgiving.) Thankfully, Leila's post on making advent wreaths inspired me so I threw this together from what I had laying around. A few small glass candle holders, and a shot glass because I only had 3, to hold the candles. I wasn't sure whether to use a large bowl or this silver try I have, and ended up resting the tray on the bowl to add some height. Then I ran outside in the rain and cut sprigs off of the 3 plants growing closest to my front door. The ribbon was languishing in a closet somewhere. I picked up some pine cones this afternoon after church where they fall near our parking spot and Voila! It's actually quite pretty. 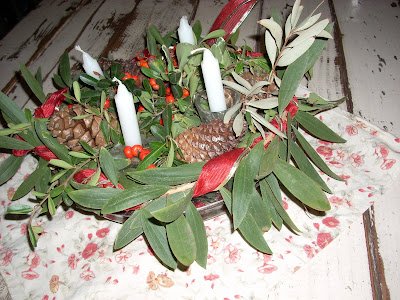 I laced together two long acacia branches to form an outside circle with a few twist ties and the ribbon. The rest is just sort of arranged in the center. It's not permanent at all. Before we lit them tonight I took out the white candles and used some taller red ones instead. I know they're not the right color, but it's what I have. The kids were enchanted and ate dinner by the light of the lone candle.

Then there was church this morning. I was excited, because I knew they were going to be celebrating advent this year and it was family Sunday so the kids would be in with us during the singing. Now you must understand that we attend a church that plays rock'n'roll type music during the singing and keeps very few traditions, so I wasn't expecting much. But people, I was very miffed at how the whole thing played out. Up at the front they had all the posters that the kids decorated last week with the different weeks of advent themes on them; hope, love, joy and peace. There had been a build up in their classes. We waited through all the songs. They didn't light the candle. We waited through the announcements, they didn't light the candle. Then they dismissed the kids to their classes and we waited through the whole freakin' sermon for them to light the candle already, which happened at the very end. Which so misses the point of having an advent wreath in the first place. Grr.

I'm so sad because they missed such an opportunity to teach. It's like no one understands how kids learn. The pastor's wife even stood up there during communion and talked about how God told the children of Israel to keep passover and when their children ask why they do it to tell them, and that we should do the same when we take communion and our children ask why we do it. All the time she is saying this there is AN ADVENT WREATH BEHIND HER, that a lot of the kids have never seen, and wonder why it's there and what it's about, and they say nothing about it while the children are in the room! The mind boggles at the missed opportunities. Fortunately, I don't depend on them to teach my children anything so I was only miffed, and I got over it.

Hannah was supposed to be teaching Sunday school for second service. It's a hard job because there is such a mix of ages in there. This week, due to some oversight, she had no curriculum to work with so while we talked about what she could do I sort of jumped on the advent theme, duh! I read to the kids about the angel coming to Zechariah and Mary, and then we made advent calendars. (Full disclosure: I didn't even think about advent calendars until last night, and I was kicking myself for not getting one for the kids to do. So this craft may have been slightly self serving.) I think it's really cool. 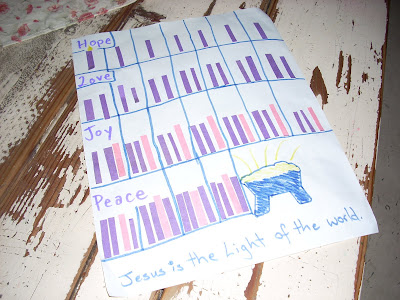 For every day between now and Christmas eve we pasted in the number of candles that would be lit on the wreath with construction paper. Each day the kids are to draw a flame on the candles in that days box to mark the time. I think it's pretty cute. And if you are behind like I am on these things, it's also got the benefit of being another thing you can throw together with the stuff you have on hand, like we did.

It was easy to do, the kids can count down, and it really brings home the idea of the light increasing as the time draws near.
I like to make stuff