November 17, 2009
The Boy kneels on the floor sobbing, surveying what used to be an entire fort for his army guys to defend, complete with cannon, now scattered Lego pieces kicked all over the carpet. Little stands in the corner, arms crossed defiantly, brow furrowed, lower lip sticking out. She is angry because there was no page for her to scribble on identical to the big kids school work today, and she doesn't want to color in one of her 20 books instead. While the big kids were working on school she quietly knocked down and kicked to pieces all of the Boy's Lego creations.

I stand surveying the aftermath.

He is heartbroken. He can't remember how he built it, he can't reassemble the pieces and I kneel on the floor with him as he wraps his arms around me and sobs.

A while later I am holding Little, nursing her actually, as she continues to be sad, this time because of the discipline she received for choosing to hurt someone in anger. The Boy comes out of the bedroom again, still sad and leans into me, needing hugs and comfort.

This must be what it's like for God all the time. His children are constantly causing each other pain, and in pain themselves, and he holds us all at once, and loves us all.

A few minutes later I guide Little through an apology. "I shouldn't have broken your Lego. It was wong. I'm sowwy I hurt you. Pwease fowgive me."

"I forgive you," he responds, and I see a smile pass across his face for a moment.

She nods, and shifts her weight from foot to foot in the silly wiggling way she has and then throws herself at him and wraps her arms around his chest as he kneels on the floor to return the hug. They run off together laughing, inseparable. For an hour they want nothing more than to please each other. She wants him to lie down with her in her bed during quiet time, and he agrees for a while. 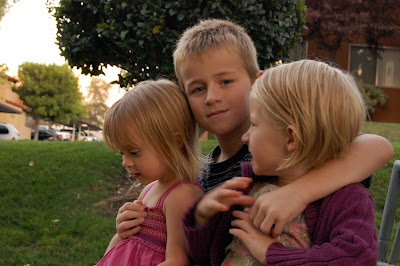 This is what forgiveness does. It heals us. It heals God's family. It brings us back into relationship with him and with each other. No wonder Jesus made such a big deal about it. No wonder Paul did too. Without forgiveness these relationships we have with each other don't work. We will always wrong each other, disappoint. We must be able to forgive to go on together. We must go on together or or lives become bleak, empty and desolate things without any meaning.