I owe you updates

January 11, 2010
At Thanksgiving I shared with you all my mother in law's story about  a little girl named Usha and her family that lives in a slum in India. She was asking all of her dinner guests to bring their pocket change to help that family. Some of you gave too. At final count the total given was more than $500, which translate to roughly 25, 000 Indian rupees. That's a lot of money for a family living in a slum to receive so it's a really significant gift for them. Thanks to those of you who gave. 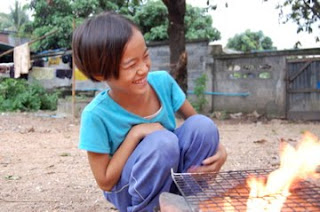 At Christmas I sent out an SOS to raise enough to give the refugee kids at the Charis home beds that were off of the concrete floor and warm clothes and shoes. I am thrilled to report that every single last drop of money that we needed for that came in. You guys rock! We even sent about $200 extra to throw a Christmas party for the kids and community. I can't even think about what a change that will be for them compared to last year without crying a little.

They are welding the beds together this month. I promise to post pictures as soon as I have them. Thank-you for helping. It may not have been much to you, but it changed things for a child or two in Thailand and was huge for them. So thanks.
so do something about it