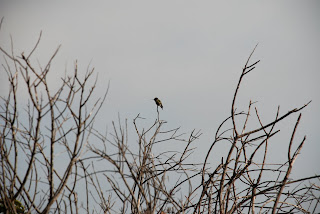 "You don't deserve anything," he said, and the words stung. "No one does."

"You aren't owed anything. Stop acting as though you are. You're alive. Everything else is is gravy. It's just an accident that you are in North America worried about getting the birth you want and not in Africa somewhere just hoping you live through the birth of your next child and drinking dirty water from a mud hole. You are not entitled to any more than anyone else. You are not more special than anyone else. Everything you have is a gift. Stop acting like the world owes you anything, it doesn't."

It took 7 years of marriage to get to this point, where I could hear, and he could say. Seven years of him enduring my complaining, restless, thankless ways. Seven years of my failing to see the love in action as he rose early and worked daily and stayed when he'd rather go sometimes. I complained that I didn't feel loved anymore. Seven years of me growing up as I had not known I needed to, just to grow the strength to hear what I needed to hear without rejecting it.

It hurt. But it was true. I asked, he answered, and he was right. I behaved like a spoiled child, even while going through the motions of being an adult. I compared my life to the way it was "supposed to be" asking "Why me?", rather than live with the way it actually is, a product of my own choices. Where the idea of what it ought to be came from I don't even know but there was a standard in my head, and I constantly measured my life against it.

I finally understood. He wasn't saying it to be cruel. He was saying it because living like I was owed something, living a thankless life, was making me miserable, and I was destroying the life I did have wallowing in self pity over should-have-beens and what ifs.

Can I even begin to describe the difference it makes to really understand that nothing but circumstance separates me from any one, anywhere? When I put myself in the shoes of a woman raising her children on less than a dollar a day in a house built of cardboard and realize that she and I are the same, I don't deserve my life of luxury and ease with clean tap water and adequate food any more than she deserves her rat and flea ridden existence, always at the edge of hunger, it changes me. The things I take most for granted she would consider miraculous, precious gifts. So why don't I give thanks as she would for what I have?

The world doesn't owe me anything. God doesn't owe me anything... in fact... I am indebted for the goodness I have been given, the abundance that is my life. How can I, who have been given so much act as though I am owed even more? Like a child at the close of a party filled with wonderful gifts weeping into her pillow at the absence of one coveted item, forgetting completely the bounty of the day. Had she no gifts at all she still has the love of her parents, food in her belly, and a pillow to cry in, but she sees none of that for the thing she wants but did not get.

Yet I am loved still, and have known love all my life. Gently the One who loves me takes my hand, speaks through the man He has given me to love, and shows me my sister, that woman living in the cardboard house, no more deserving of her fate than I of mine and asks, "Do you see?"

It's as though I have been blind, and finally my eyes open. I see my life for what it is, a gift; every messy, beautiful, hard, and painful bit of it. I see that even she treasures the gift of the life she is given, the children she bears, the joys and sorrows of being alive. "Just being alive is a gift, anything else is gravy on top."

His words start to sink in as the days go by and I find myself wanting to fall on my face and give thanks for this little life of mine that I have been so bitterly complaining about. I ask forgiveness for being so blind and so idiotic. I want to celebrate each moment, each glorious breath. How could I have not seen it before?

"Why me?" Why not me? I live and breathe and know His love and that is enough.

Photo by Aaron.
personal growth story of my life this life together thing