Adventures in the Cold

January 25, 2011
Christmas day was a balmy -3C in Alberta. My aunts and uncles kept commenting on the gorgeous weather. We didn't really notice the balminess, there was snow on the ground after all. The next few days we were laid up thanks to whatever virus they picked up on the plane trip so by the time we were ready to give playing outside a try the temperature was plummeting and it was snowing again.


But we wanted to go skating. I promised to take them skating on the pond I skated on as a kid. So we bundled up and started out on a walk to the pond.

Right after I took this photo a lady pulled up close in her van and asked if we wanted a ride somewhere instead of walking in the cold. "Wow, I"m really in Canada," I thought, "this wouldn't happen in San Diego." 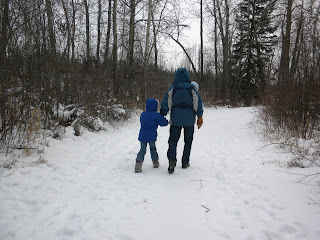 We didn't quite realize how cold it was outside, even then, with a person offering rides. 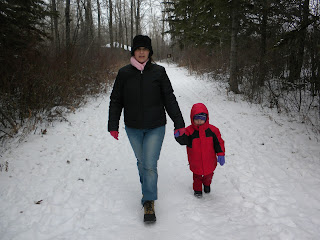 We kept going as the snow started to fall around us. My legs were freezing, but my feet were toasty thanks to the boots my friend lent to me. I don't know if I've seen her since high school, but thanks to a facebook conversation she, or her husband, dropped them off at my dad's house before I got to Canada. Actually, the girl's boots, Little's coat, and all the car seats I needed arrived the same way. (Well, and my  brother who also installed all the seats in my dad's van before he picked us up at the airport. Okay, and the baby snowsuit from my sister.) It was really amazing and generous and thoughtful. Thank-you every one who helped out with our winter fun. 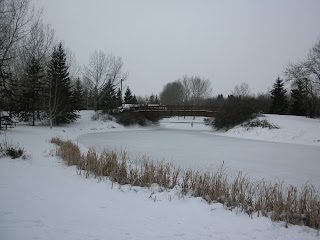 At last we reached the pond, there weren't many people skating.

Try telling 3 kids who walked 20 minutes in the cold that they don't get to go skating now. The Boy was extremely disappointed. It was when trying to console him that I noticed the white blisters on his cheeks.

When you grow up in the frozen north you spend a lot of time in school learning about frostbite and how to recognize and treat it. I've never actually seen anyone with it before. It would be my kid.

Not well versed in the ways of scarves he cleverly pulled his down when it started to get wet from his breath and exposed his wet cheeks to the bitter, bitter cold.

I was kind of glad we couldn't rent skates because I needed to thaw him out.


We sent Grandpa Shane back to get the van and pick us up. He got at least halfway there before realizing that the keys were in my pocket. Oops.


Tired of waiting and sufficiently thawed out, we ventured out to the nearby playground. It was very cold, but they didn't care. 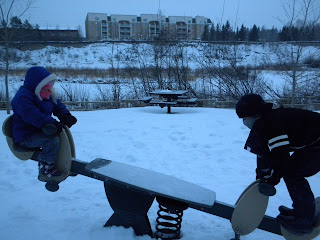 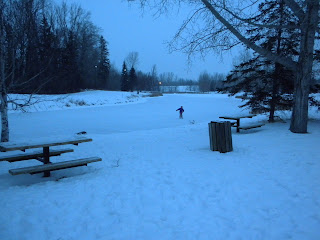 We would have to try skating another day.
life with short people we like adventures