Showing posts from February, 2011
Show all

One Thousand Gifts-The Gift of Work. 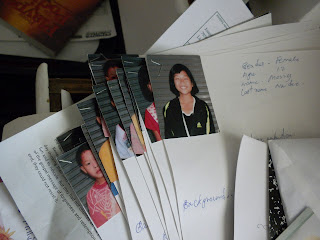 It's Monday. There is always so much work to do on Monday. The house is trashed after a weekend of being away more than at home, and it seems so much harder for the kids to get into the school routine on a Monday. That's on top of all the other stuff that never ends but that I deliberately try not to have to do on weekends so there's time together as a family. I start Monday from far, far behind. The rest hardly seems worth the extra work it brings after. Today seems a terrible day to try and stop to give thanks. Yet isn't that when it's most important to remember? So today I give thanks for the piles of paper; they are evidence of a life full of blessings most of the world only dreams of. I give thanks for all the laundry to wash fold and put away; we are well clothed and warm. I give thanks for the fractious, restless, and cranky children; I would not trade them for anything. I give thanks for the responsibilities I have, large and small; it means that I
2 comments
Read more 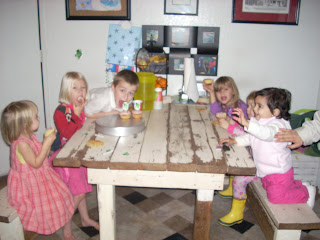 We were getting ready to move into our first apartment in California. All our furniture had been left behind in Canada, we had only what 2 minivans could carry on the drive down. I was trying not to be bitter about how unrealistic it had been to believe what we told ourselves about just buying new stuff when we got there. The idea of sitting on the floor wasn't so terrible, but having kids sitting on carpet to eat, the lack of a way to contain the food messes as they wandered was more than I could handle. So I built a table. There were old boards laying around my inlaw's house that were once part of a playground. I used power tools for the first time, saw, drill. screwdriver. I made a table that we could sit around on the floor because we had no chairs, and then I figured out how to put legs on it and build benches too. (They are a little tippy.) That table still sits in our dining room, though there is another sitting in the backyard waiting to be refinished
8 comments
Read more

Dear mother of a toddler,

February 23, 2011
This first published at MOBsociety, but I'm putting it here too because I know some of you won't click over. This morning my 9 year old son made oatmeal for all of us for breakfast. He even made me some and was thrilled to be able to do it. That was after he got himself dressed, made his bed and cleaned the bathroom, which are his jobs every morning. Later today he held his baby brother while I made lunch, played with his younger sisters and read them a story while I worked, and wiped the table after lunch. No, he isn't perfect. I had to remind him to do his jobs, twice. He hangs his head and gets a surly look on his face when I tell him to get back to school work when he is distracted, and he is very loud, and somewhat obnoxious in his eagerness to tell me the minute details of EVERY.SINGLE.THING. It's not that I don't still feel overwhelmed, like I did when they were smaller, I just feel overwhelmed by different things, in different ways. I still worry
2 comments
Read more

One Thousand Gifts-I will not worry 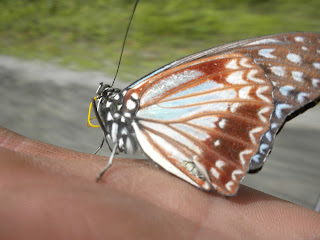 Guess what?! Getting work done leads to more work. I know you know this, but there it is. I'm deciding to give thanks for it this week instead of succumbing to mental exhaustion. I give thanks for  dirty dishes in the sink and crumbs on the floor, I have loved ones to eat my cooking. we have food to more than fill our bellies. I'm thankful for paper scrap on the floor, and books scattered everywhere. My children have the ability to read, the leisure to create, and they WILL pick it all up again when I tell them to. I'm thankful for more work to do for The Charis Project , because it means that people are being helped and kids are being saved. I have finished year end receipts and accounting. I made pretty charts showing budget expenditures, and reports. Did you know that last year only 6% of our operating budget was used for administrative types of costs? I'm proud of us for that. Of course, at our most recent board meeting our mostly business background b
Post a Comment
Read more

Just Another February Day, in SoCal 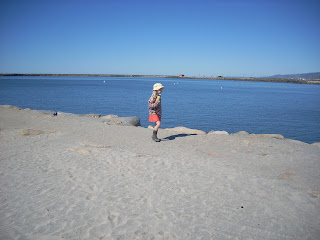 Fitting Remembrance (Or why I'm no fun) 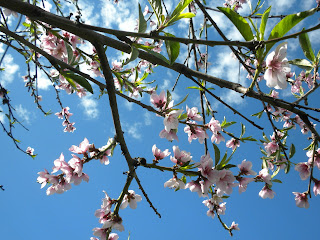 our peach tree is blossoming A man died today. Well, February 14 c269 a man died. He was a Roman Christian in the early church. He helped persecuted Christians under the reign of Claudius II when it was illegal to do so. He married young couples in Christian ceremonies when it was illegal to do so. He was arrested. Eventually, after refusing to give up his faith, and even trying to convert the emperor, he was sentenced to death by bludgeoning. When he didn't die that way they cut off his head. Legend says he also healed his jailor's daughter who was blind, and wrote her a note before his execution signed, Your Valentino. I'm guessing his last thoughts before the ax severed his head were not, "Gee, I really hope Hallmark monetizes my name in order to sell more crappy cards and I hope my memory will make those who aren't in a relationship feel really crummy that they are alone, and I hope that women will get angry at men for not buying them gifts in my name
5 comments
Read more

February 10, 2011
Today I'm over at the MOBsociety trying to encourage moms of little people. Here's an excerpt: No, he isn’t perfect. I had to remind him to do his jobs, twice. He hangs his head and gets a surly look on his face when I tell him to get back to school work when he is distracted, and he is very loud, and somewhat obnoxious in his eagerness to tell me the minute details of EVERY.SINGLE.THING. It’s not that I don’t still feel overwhelmed, like I did when they were smaller, I just feel overwhelmed by different things, in different ways. You can click through to read the rest. Also, a little while back Alice Bradley of Finslippy asked  twitter what kind of parenting topics she could write about. Knowing she has a boy the same age as mine and would understand I asked her, @finslippy How do you get 9 year-old boys to stop talking ALL. THE. TIME. about Lego or whatever else is running through their head?  Here in Redbook magazine is her hilarious response . Oh, and
Post a Comment
Read more 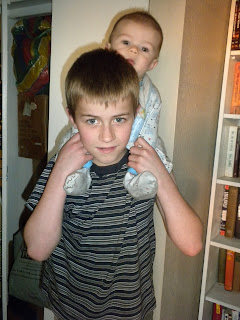 I've spent a lot of the past week trying to finish all of the year end receipts and reports for The Charis Project. I have been struggling to make unfamiliar programs do what I need them to do, and get on top of the work pile. The Boy being a big brother Instead of going out for tea with my kids on Saturday morning like planned I spent it puking for what seemed like an endless amount of time. (In my middle age I seem have developed the sensitive stomach my dad always told me about, time for ginger tea and moderation when it comes to grease and sugar. It's the perfect diet plan. Either eat food I shouldn't and then immediately throw up, or don't eat it at all.) The birthday dinner the night before with the extended family was lovely though and it was me who requested the fish and chips. Honestly I've spent a lot of this week feeling like I will never, ever, get everything done that needs to be done, ever. I've felt like I am way under qualified for the li
Post a Comment
Read more

February 03, 2011
We were driving to my in-law's house on Friday night and I was telling Aaron about the kids at Drawn from Water in Ethiopia that some acquaintance of ours, Jesse and Levi, were rescuing. They were putting those children up for adoption. Then I moved to tell him about some information my friend sent me about getting funding for international adoptions. In the middle of my telling he turned to me, looked me in the eyes and knowing where this was going said, "Yes." Then he teared up for second or two and said, "It seems impossible, but so much of our life is impossible right now. I'm open to it happening since it wouldn't really happen unless God makes it happen." I wrote to Jesse and she told me which agency they were working with and what we had to do. At the same time she asked if we had considered adopting through the state as they had done. "I feel like a traitor mentioning this..." she said, "But it worked out really well for us.
7 comments
Read more 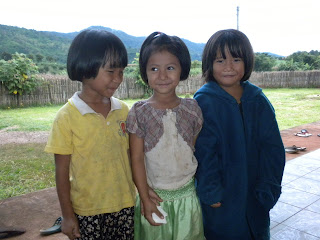 Adult men pay to have sex with little girls and boys as young as 5 in South East Asia. Children may work their whole lives in slavery to pay the debts of their parents. In Burma soldiers kill entire villages , children witness, tied to a tree, as men rape and kill their mother, shoot their father in the head and if they are lucky, they escape to tell that story in a refugee camp. There is a before and an after. There is life before I knew these things… and there is life after where I try to understand what to do with my crushed heart and the minute by minute awareness that in the time it took me to feed my children breakfast someone else's children died of starvation, children were raped, killed, trafficked, and orphaned. How do I live with this knowledge? What can I do? It’s been more than a decade since I first asked that. It was exactly 10 years ago this month that my husband and I first visited an orphanage with the idea to figure out what we could do. I ad
1 comment
Read more
More posts