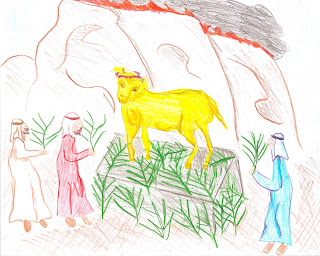 Exodus 32
The Golden Calf
1 When the people saw that Moses was so long in coming down from the mountain, they gathered around Aaron and said, "Come, make us gods who will go before us. As for this fellow Moses who brought us up out of Egypt, we don't know what has happened to him." 2 Aaron answered them, "Take off the gold earrings that your wives, your sons and your daughters are wearing, and bring them to me." 3 So all the people took off their earrings and brought them to Aaron. 4 He took what they handed him and made it into an idol cast in the shape of a calf,fashioning it with a tool. Then they said, "These are your gods, Israel, who brought you up out of Egypt." 5 When Aaron saw this, he built an altar in front of the calf and announced, "Tomorrow there will be a festival to the LORD." 6 So the next day the people rose early and sacrificed burnt offerings and presented fellowship offerings. Afterward they sat down to eat and drink and got up to indulge in revelry. 7 Then the LORD said to Moses, "Go down, because your people, whom you brought up out of Egypt, have become corrupt. 8 They have been quick to turn away from what I commanded them and have made themselves an idol cast in the shape of a calf. They have bowed down to it and sacrificed to it and have said, 'These are your gods, Israel, who brought you up out of Egypt.' 9 "I have seen these people," the LORD said to Moses, "and they are a stiff-necked people. 10 Now leave me alone so that my anger may burn against them and that I may destroy them. Then I will make you into a great nation." 11 But Moses sought the favor of the LORD his God. "LORD," he said, "why should your anger burn against your people, whom you brought out of Egypt with great power and a mighty hand? 12 Why should the Egyptians say, 'It was with evil intent that he brought them out, to kill them in the mountains and to wipe them off the face of the earth'? Turn from your fierce anger; relent and do not bring disaster on your people. 13 Remember your servants Abraham, Isaac and Israel, to whom you swore by your own self: 'I will make your descendants as numerous as the stars in the sky and I will give your descendants all this land I promised them, and it will be their inheritance forever.' "


30 The next day Moses said to the people, "You have committed a great sin. But now I will go up to the LORD; perhaps I can make atonement for your sin." 31 So Moses went back to the LORD and said, "Oh, what a great sin these people have committed!They have made themselves gods of gold. 32 But now, please forgive their sin--but if not, then blot me out of the book you have written." 33 The LORD replied to Moses, "Whoever has sinned against me I will blot out of my book. 34 Now go, lead the people to the place I spoke of, and my angel will go before you. However, when the time comes for me to punish, I will punish them for their sin." 35 And the LORD struck the people with a plague because of what they did with the calf Aaron had made.
Exodus 33
1 Then the LORD said to Moses, "Leave this place, you and the people you brought up out of Egypt, and go up to the land I promised on oath to Abraham, Isaac and Jacob, saying, 'I will give it to your descendants.' 2 I will send an angel before you and drive out the Canaanites, Amorites, Hittites, Perizzites, Hivites and Jebusites. 3 Go up to the land flowing with milk and honey. But I will not go with you, because you are a stiff-necked people and I might destroy you on the way." 4When the people heard these distressing words, they began to mourn and no one put on any ornaments. 5 For the LORD had said to Moses, "Tell the Israelites, 'You are a stiff-necked people. If I were to go with you even for a moment, I might destroy you. Now take off your ornaments and I will decide what to do with you.' " 6 So the Israelites stripped off their ornaments at Mount Horeb.


The Tent of Meeting

7 Now Moses used to take a tent and pitch it outside the camp some distance away, calling it the "tent of meeting." Anyone inquiring of the LORD would go to the tent of meeting outside the camp.8 And whenever Moses went out to the tent, all the people rose and stood at the entrances to their tents, watching Moses until he entered the tent. 9 As Moses went into the tent, the pillar of cloud would come down and stay at the entrance, while the LORD spoke with Moses. 10Whenever the people saw the pillar of cloud standing at the entrance to the tent, they all stood and worshiped at the entrances to their tents. 11 The LORD would speak to Moses face to face,as one speaks to a friend. Then Moses would return to the camp, but his young aide Joshua son of Nun did not leave the tent.
12 Moses said to the LORD, "You have been telling me, 'Lead these people,' but you have not let me know whom you will send with me. You have said, 'I know you by name and you have found favor with me.' 13 If you are pleased with me, teach me your ways so I may know you and continue to find favor with you. Remember that this nation is your people." 14 The LORD replied, "My Presence will go with you, and I will give you rest." 15 Then Moses said to him, "If your Presence does not go with us, do not send us up from here. 16 How will anyone know that you are pleased with me and with your people unless you go with us? What else will distinguish me and your people from all the other people on the face of the earth?" 17 And the LORD said to Moses, "I will do the very thing you have asked, because I am pleased with you and I know you by name."

Israel, and the rag tag rabble of other people who decided to throw their lot in with them when they left Egypt, don't know how to be the people of God, and how to function without an idol to worship. While Moses is up on the mountain learning from God about how to be His people, how to build a tabernacle, how to live righteously, they give Aaron all their gold and he makes an image of a cow for them to worship.

God's plan for these people is not going well. They are very slow to learn. He's ready to scrap the whole idea and start over again with Moses. But Moses begs Him not to.

When God relents a little and says that He will send them, but he will not go himself, he will send an angel instead, Moses again begs for Him to go with them.

When my oldest son was less than one year old he figured out how to take the lid off the trash can and started sucking on things he found in the trash, like egg shells. It was disgusting and dangerous for him. He could have gotten very sick. I had to teach him not to do it. I tried first to just take him away from the trash can, over and over again, but he thought it was just a funny game and would go right back to it. I gave him good food to eat and snack on, but he still wanted to play with the trash, and put it in his mouth. He was too little to understand things like food poisoning and the difference between trash and other things, so I couldn't just tell him about it. I had to make it so that he knew that something bad would happen as soon as he touched the trash can. So I did it. I made something unpleasant happen to him every time he took the lid off the can until he stopped doing it.
He couldn't understand the worse kind of unpleasantness that was dangerous for him if he didn't stop eating trash, so I gave him a consequence he could understand.
When I read this story about the Israelites, and the consequences God gave them for what they did, I think about my little boy and what he needed to learn, and I think that God was teaching the Israelites the same way. He was feeding them with good things, and they wanted garbage instead. So he made them all get sick, to teach them to stay away from the garbage.
God in the end doesn't give up on His people. But it's going to take a long time to teach them what they need to know.
Is there anything that was hard for you to learn that was really important? Did your mom or dad help you to learn it? What did they do?
Lent the church year for children