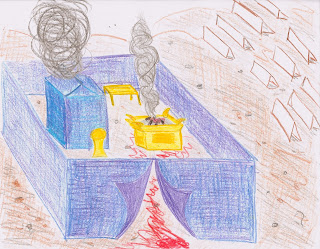 
The Glory of the LORD

The Israelites would continue to distrust, and disobey God. He would keep them in the wilderness for an entire generation, because that's how long it took to teach them to trust him. The new generation grew up living on God's provision, with the presence of God nearby, and they would be better at listening and obeying, without doubt.

But before that, something very important happened in the wilderness, something that will affect the way they understood things for ages to come. While Moses was on the mountain with God he gave him directions for building a tabernacle, a place set apart for the worship of God. See, the habit of worship and sacrifice to the God's was so ingrained that they made themselves an idol rather than not have anyone to worship, so God taught them how to worship him, properly. He would use forms and images that they were familiar with in order to show them something they didn't understand and make it plain to them.

To us some of these things aren't very plain, but that's because our lives are very different today than the lives of the Israelites. We buy our meat and vegetables in stores. If they wanted meat they had to kill and animal themselves, cut it up, and cook it. We have water that comes out of taps and toilets that flush. They had to live near a stream or pond to get water and they had to dig a hole to go to the bathroom in and then bury it. God even told them how far away they had to walk before they dug a toilet hole so that all the human waste wouldn't get into the water or the camp and make people sick. We live in houses that stay in the same place and have lot's of stuff in them. They lived like nomads and packed up their tents and everything they owned in order to walk to a different place.

Can you imagine picking up the place where you live and everything you own in order to move somewhere else for a few months?

Hebrews 8:5 says that the tabernacle in the wilderness was a copy and shadow of the true tabernacle in heaven, and it was here that they would start to learn about the kingdom of heaven.

They would sacrifice animals as part of their worship and to see and understand that everything they had was a gift that God gave them. They were giving back to Him something that was already His, but it was to show their hearts that it was God who took care of them, and gave them everything they needed. Animals were very valuable, they provided skins and wool for clothing and tents, milk to drink, and meat to eat to to give one to God was a big deal. It might be as big as if your family were to give God a car.

The sacrifices and the tabernacle were used to teach them about who God is, and help them learn to think like the people of God. God gave them laws, partly to teach them that they couldn't be like God and show his image on their own. For the law was not easy to keep. It was a bunch of rules that went against what the people actually wanted to do. Behaving as they were supposed to didn't come from inside their hearts, it was something they had to do even though they wanted to do other things.

God promised that one day he would change their hearts, so doing what was right would come from inside them. Until then it was not easy to keep the law, but the sacrifices would make it easier.

Tomorrow we will learn about the most important sacrifice of all that God told them about.
Lent the church year for children