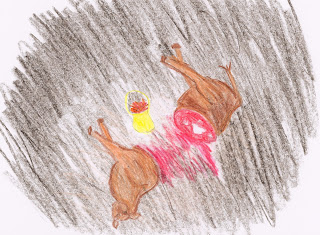 Judges 2
"The Angel of the LORD at Bokim
1 The angel of the LORD went up from Gilgal to Bokim and said, "I brought you up out of Egypt and led you into the land I swore to give to your ancestors. I said, 'I will never break my covenant with you, 2 and you shall not make a covenant with the people of this land, but you shall break down their altars.' Yet you have disobeyed me. Why have you done this? 3 And I have also said, 'I will not drive them out before you; they will become traps for you, and their gods will become snares to you.' " 4 When the angel of the LORD had spoken these things to all the Israelites, the people wept aloud, 5 and they called that place Bokim. There they offered sacrifices to the LORD"

10 After that whole generation had been gathered to their ancestors, another generation grew up who knew neither the LORD nor what he had done for Israel. 11 Then the Israelites did evil in the eyes of the LORD and served the Baals. 12 They forsook the LORD, the God of their ancestors, who had brought them out of Egypt. They followed and worshiped various gods of the peoples around them. They aroused the LORD's anger 13 because they forsook him and served Baal and the Ashtoreths. 14 In his anger against Israel the LORD gave them into the hands of raiders who plundered them. He sold them into the hands of their enemies all around, whom they were no longer able to resist. 15 Whenever Israel went out to fight, the hand of the LORD was against them to defeat them, just as he had sworn to them. They were in great distress. 16 Then the LORD raised up judges, who saved them out of the hands of these raiders.17 Yet they would not listen to their judges but prostituted themselves to other gods and worshiped them. Unlike their ancestors, they quickly turned from following the way of their ancestors, the way of obedience to the LORD's commands. 18 Whenever the LORD raised up a judge for them, he was with the judge and saved them out of the hands of their enemies as long as the judge lived; for the LORD relented because of their groaning under those who oppressed and afflicted them. 19 But when the judge died, the people returned to ways even more corruptthan those of their ancestors, following other gods and serving and worshiping them. They refused to give up their evil practices and stubborn ways. 20 Therefore the LORD was very angry with Israel and said, "Because this nation has violated the covenant I ordained for their ancestors and has not listened to me, 21 I will no longer drive out before them any of the nations Joshua left when he died. 22 I will use them to test Israel and see whether they will keep the way of the LORD and walk in it as their ancestors did." 23 The LORD had allowed those nations to remain; he did not drive them out at once by giving them into the hands of Joshua.

Eventually the Israelites follow God all the way into Canaan, the land God promised them. By obeying Him they are able to enter and settle in the land. Hooray! Now they can do what God told them, live righteously and be a light to the nations around them, right?

First, they quit before the job is all the way done and settle among the Canaanites and other people who are there who don't know God. They mix with them and soon forget what they learned in the wilderness.

Soon they forget about God's laws, so God stops protecting them from the nations around them who want to take over Israel, in order to get them to wake up and pay attention and follow him again. then he sends them a judge to lead them and guide them. They win, drive out the other guys in battle and then...what?

Oh that's right, they forget again and go back to doing whatever they want.

So God lets them get attacked and then rescues them again.... and again... and are you beginning to see a pattern here?

You know, anyone but God would have given up on these people. Even God wanted to a couple of times. But He made a promise to Abraham, and He remembered it, and He would keep it.

Genesis 15
6 Abram believed the LORD, and he credited it to him as righteousness. 7 He also said to him, "I am the LORD, who brought you out of Ur of the Chaldeans to give you this land to take possession of it." 8 But Abram said, "Sovereign LORD, how can I know that I will gain possession of it?" 9 So the LORD said to him, "Bring me a heifer, a goat and a ram, each three years old,along with a dove and a young pigeon." 10 Abram brought all these to him, cut them in two and arranged the halves opposite each other; the birds, however, he did not cut in half. 11 Then birds of prey came down on the carcasses, but Abram drove them away. 12 As the sun was setting, Abram fell into a deep sleep, and a thick and dreadful darkness came over him. 13 Then the LORD said to him, "Know for certain that for four hundred years your descendants will be strangers in a country not their own and that they will be enslaved and mistreated there. 14 But I will punish the nation they serve as slaves, and afterward they will come out with great possessions. 15 You, however, will go to your ancestors in peace and be buried at a good old age. 16 In the fourth generation your descendants will come back here, for the sin of the Amorites has not yet reached its full measure." 17 When the sun had set and darkness had fallen, a smoking firepot with a blazing torch appeared and passed between the pieces. 18 On that day the LORD made a covenant with Abram and said, "To your descendants I give this land,from the Wadi of Egypt to the great river, the Euphrates--

That part about passing between the pieces of animals may not make sense to you at first. In the time of Abraham when two people made an agreement, like to borrow money, they would cut up an animal like this and he weaker person, or the borrower, would walk through it. It was like making a promise that said, "May I end up cut up like this animal if I break my word."

It was a very strong contract. But God, the strongest one in this promise is the one who passes through the carcass. It is God who says, "May I end up like this animal if I don't keep my word to you Abraham. I will bear in my own body the consequences of keeping this promise."

But how? How will God keep his promise to bless he world through Abraham's descendants if they can't even remember to keep His laws and honor the covenant from one generation to the next?

Have you ever been frustrated with someone who keep doing the same thing they shouldn't over and over again?
Lent the church year for children