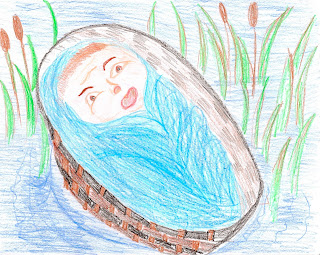 Exodus 2
1 The Birth of Moses
"1 Now a man of the house of Levi married a Levite woman, 2 and she became pregnant and gave birth to a son. When she saw that he was a fine child, she hid him for three months. 3 But when she could hide him no longer, she got a papyrus basket[a] for him and coated it with tar and pitch. Then she placed the child in it and put it among the reeds along the bank of the Nile. 4 His sister stood at a distance to see what would happen to him.
5 Then Pharaoh's daughter went down to the Nile to bathe, and her attendants were walking along the riverbank. She saw the basket among the reeds and sent her female slave to get it. 6 She opened it and saw the baby. He was crying, and she felt sorry for him. "This is one of the Hebrew babies," she said.
7 Then his sister asked Pharaoh's daughter, "Shall I go and get one of the Hebrew women to nurse the baby for you?"
8 "Yes, go," she answered. And the girl went and got the baby's mother. 9 Pharaoh's daughter said to her, "Take this baby and nurse him for me, and I will pay you." So the woman took the baby and nursed him. 10 When the child grew older, she took him to Pharaoh's daughter and he became her son. She named him Moses,[b] saying, "I drew him out of the water."
10 11
11 Moses Flees to Midian
11 One day, after Moses had grown up, he went out to where his own people were and watched them at their hard labor. He saw an Egyptian beating a Hebrew, one of his own people. 12 Glancing this way and that and seeing no one, he killed the Egyptian and hid him in the sand. 13 The next day he went out and saw two Hebrews fighting. He asked the one in the wrong, "Why are you hitting your fellow Hebrew?"
14 The man said, "Who made you ruler and judge over us? Are you thinking of killing me as you killed the Egyptian?" Then Moses was afraid and thought, "What I did must have become known."
15 When Pharaoh heard of this, he tried to kill Moses, but Moses fled from Pharaoh and went to live in Midian, where he sat down by a well. 16 Now a priest of Midian had seven daughters, and they came to draw water and fill the troughs to water their father's flock. 17 Some shepherds came along and drove them away, but Moses got up and came to their rescue and watered their flock.
18 When the girls returned to Reuel their father, he asked them, "Why have you returned so early today?"
19 They answered, "An Egyptian rescued us from the shepherds. He even drew water for us and watered the flock."
20 "And where is he?" he asked his daughters. "Why did you leave him? Invite him to have something to eat."
21 Moses agreed to stay with the man, who gave his daughter Zipporah to Moses in marriage. 22 Zipporah gave birth to a son, and Moses named him Gershom,[c] saying, "I have become a foreigner in a foreign land."
23 During that long period, the king of Egypt died. The Israelites groaned in their slavery and cried out, and their cry for help because of their slavery went up to God. 24 God heard their groaning and he remembered his covenant with Abraham, with Isaac and with Jacob. 25 So God looked on the Israelites and was concerned about them."

Why did Moses's mother have to hide him? Do you remember? Her little baby was a boy, and Pharaoh had ordered his people to throw all the boy babies into the river.

For 3 months she hides him somewhere in her house. She must have to work so hard to keep him quiet so no one can hear and find out he is there. Maybe she dresses him like a girl to fool people. We don't really know. But we do know that she loved her baby boy. She thought long and hard about how to protect him and keep him safe. When he gets to be 3 months old she decides it's not safe to try and hide him in the house any more. She needs a new plan.

She ends up taking him to the same place that all the baby boys are taken, but not to throw him in, to hide him.  Maybe she hopes no one will hear him cry there. Maybe the river is the last place they will look for a baby boy since all the mothers want to keep their babies far, far away from the place where they are taken when they are found.

But while he is floating in the river in the little basket boat that his mama made for him, big sister watching nearby, something unexpected happens. Pharaoh's daughter finds the basket. The baby Moses is in great danger. She knows he is one the Hebrew babies. She knows the law is to throw him in the river. But she feels sorry for him and picks him up instead.

We're going to stop here for a moment and think about that. She feels sorry for him and picks him up. What would you do if you saw a baby crying all by itself? What if the baby wasn't from the same background as you? Maybe his skin was a different color and his eyes were shaped different from yours. Would that change how you treated him?

I'm pretty sure that you would pick that baby up and take care of it. I know I would. God made us to respond to babies with love and compassion. It's natural for us to care about people and to help them. People who are cruel and mean have to have all that love and care forced out of them to become that way. Remember, we are made in God's image. We are meant to love each other with God's love for the world he made.

When Pharaoh's daughter picked up the baby Moses it was God's spirit that moved her to do it. It was because she too was made in God's image and she recognized another person who was made in his image. Even if she didn't understand it like that. She probably believed that he was a gift from one of the Egyptian gods in charge of the Nile river.

Pharaoh's daughter doesn't know it, but her compassion for a little baby floating in the river is going to change everything someday. For that baby will live. He will grow up, and God will remember his promise to Abraham, Isaac and Jacob and Moses is going to be part of God's plan to set them free.

He just doesn't know it yet.

He starts out trying to protect the Hebrews from the Egyptians on his own, and he kills one of them.

If you read about this story in a children's bible, the kind with the pretty pictures to look at and the stories retold for little kids, they might skip this part. Moses doesn't start out as a good guy, and that may be confusing for some people. Moses kills another man, and then tries to hide it so he won't get in trouble.

What did God say about killing when he made his promise to Noah with the rainbow in the sky?

Moses was saved as a baby because Pharaoh's daughter protected him, but now he has killed someone else. He runs away to escape from Pharaoh who wants to kill him and he hides out in Midian. Eventually he settles down in Midian and doesn't make any plans other than to herd sheep and take care of his new family.

Surely God wouldn't use Moses now. He's a murderer, a runaway, and a sneak. God only uses heroes, right? What do you think?

*Note for parents-We are taking a moment after everyone is ready for bed to sit together and read. We are also lighting a candle at dinner that stays lit until the reading is done. Feasts in the Bible almost always have something to do with meals, probably because we eat everyday and so children notice a change in routine.

We used to stay at the table and read the scriptures after Shabbat meals and the children drew and colored pictures of what we were reading.  This is a good way to keep littles from disturbing everyone else and they pick up more than you know just listening while they do something fun with their hands.
Lent the church year for children