A Child's Lenten Meditation-Day 21-The Maccabees 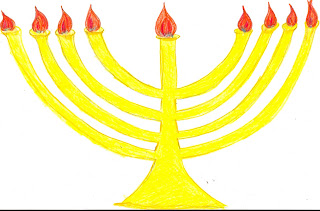 After the Remnant returned from Exile and rebuilt the temple and the wall of Jerusalem there were no prophets. There was no word from God for 400 years!

The people lived in the land, and like we talked about yesterday, they did their very best to follow God's laws. They were very religious, very pious. They tithed. Even the mint that grew in their gardens they gave a part of it to the temple.

In 200 BC Israel was once again conquered by a foreign power. This time it was the Greeks. Well, they were called the Seleucid Empire. They were left in charge after Alexander the Great died. You may have heard of him.

Antiochus Epiphanes was the governor of Judea, and he wanted all the Jews to be like Greeks. He put a statue of the Greek God Zeus in the temple. He forced Jews to eat unclean food that the laws of God in Torah forbade them to eat. He made it a crime to possess the Holy Scriptures.

Finally, one man named Matthatias killed another man in his village who was offering sacrifices to a Greek idol. His 4 sons led a revolt against Antiochus and won. They were called the Maccabees.

They captured Jerusalem and rededicated the temple to God. There is a story of a miracles that happened when they did. They needed special oil for the temple dedication but all of it had been destroyed except one small jar that was only enough for one day. The lamp in the temple was never supposed to go out but it tool 7 days to make the special temple oil. The miracle is that the oil in the lamp lasted for 8 whole days, long enough for them to make more. There is a whole Jewish festival. called Hannukah that celebrates this miracle. They light candles for 8 nights to remember the miracle of the lights.

No one interfered with the temple after that. They were always ruled by foreign rulers who demanded that they send money and goods as taxes, bu they were allowed to worship God in the temple for the next 200 years or so.

Finally, after a very long silence, God would move again. Maybe now the Presence of God would come back to Israel, and back to the temple.
Lent the church year for children