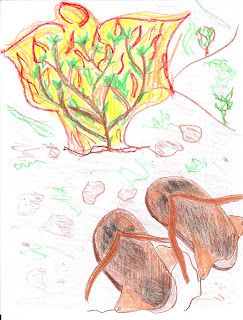 Exodus 3
1 Moses and the Burning Bush
1 Now Moses was tending the flock of Jethro his father-in-law, the priest of Midian, and he led the flock to the far side of the wilderness and came to Horeb, the mountain of God. 2 There the angel of the Lord appeared to him in flames of fire from within a bush. Moses saw that though the bush was on fire it did not burn up. 3 So Moses thought, "I will go over and see this strange sight—why the bush does not burn up."
4 When the Lord saw that he had gone over to look, God called to him from within the bush, "Moses! Moses!"
4 And Moses said, "Here I am."
5 "Do not come any closer," God said. "Take off your sandals, for the place where you are standing is holy ground." 6 Then he said, "I am the God of your father, the God of Abraham, the God of Isaac and the God of Jacob." At this, Moses hid his face, because he was afraid to look at God.


Moses really wasn't expecting anything different to happen that day when he woke up. He had probably slept on the ground, beside the sheep. He was far from home, and it was his job to keep the flock safe from wild animals that might eat them. That's what a shepherd does. He takes the sheep to where there is food for them to eat, water for them to drink, and he stands between them and the wild animals that want to kill them.

But this isn't an ordinary day. The living God, Yahweh, the creator of the world is trying to get Moses's attention.

When the angel of the Lord sits in a bush it looks like it's on fire. When Moses goes over to check it out God calls his name! God knows who he is.

"Take off your sandals you are standing on holy ground."

What? Why would God say that? Does that make any sense?

(Dear parent, please stop at these questions let your children think about it and wonder and talk for a while.)

Moses grew up in Egypt where they had huge, beautiful temples built to honor the Egyptian gods. You had to take your sandals off before entering the temple.  Egypt was a dusty, dirty, hot place. Shoes get dirty. Your shoes get dirty. Does your mom make you take them off before you come into the house?

The Egyptians took of their shoes so they wouldn't defile, that means make unclean, the temples of their gods with the filth and muck of world. They took off their shoes in the temple out of respect for their gods.

But the God of Abraham, Isaac and Jacob doesn't need a big stone building.


"The earth is the Lord's, and everything in it, the world, and all who live in it;
for he founded it on the seas and established it on the waters.
Who may ascend the mountain of the Lord? Who may stand in his holy place?
Those who have clean hands and a pure heart,
who do not put their trust in an idol
or swear by a false god."(Psalm 24:1-4)
"This is what the Lord says"
"Heaven is my throne,
and the earth is my footstool.
Where is the house you will build for me?
Where will my resting place be?
Has not my hand made all these things, and so they came into being?"
Isaiah 66:1-2

A dusty scrub covered hill on the far side of the wilderness is now the greatest temple of all, because God is there, so Moses takes off his shoes, and the God of heaven talks to him. How amazing is that?
What about all of the other places that God is? Are those holy places too? Where is God's temple? Where is God?

A long time after our story here, a Hebrew man named Paul is talking to some Greeks who have big stone temples with lots of idols and statues of gods in them that they worship. He says,

"The God who made the world and everything in it is the Lord of heaven and earth and does not live in temples built by hands. And he is not served by human hands as if he needed anything. Rather He himself gives everyone life and breath and everything else. From one man he made all the nations, that they should inhabit the whole earth... God did this so that they would seek him and perhaps reach out for him and find him, though he is not far from any of us. For in him we live and move an have our being." (Acts 17:24-28a)

That same man also said, "Do you not know that your bodies are temples of the Holy Spirit, who is in you, whom you have received from God? You are not your own."(1 Corinthians 6:19)

Well now, how did that happen?

Remember on day one when we talked about how God knew we couldn't be His image and do his work without the help of His Spirit? Somehow, between the time of Noah, and the time of Paul, something changes, and our bodies become the temples of the Holy Spirit, God gives people His spirit and actually lives in them. We will get to that part of the story later on. What do you think God is going to do to make it happen?

But when Moses was talking to God he had no idea about God's spirit getting into people. He wasn't even sure who God was at first. Isn't that strange? God knew who he was, but he didn't know who God was.

Remember, God is still working on the plan he started with Noah to show the world what He is like. Only a small tribe in Canaan knew anything about him before they went into Egypt and grew so large.

Moses knows about those guys, and he knows the stories of the God who called them. He knows that the God talking to Him is strong and powerful and he is afraid of what will happen to him if he looks at God, so he hides his face. He's afraid to even stand in front of God, let alone have God's spirit in him.

Do you know any of the stories that Moses knows about the God of Abraham, Isaac and Jacob? Can you think of any that would make him afraid? Those guys had some very interesting and impressive encounters with God over the years. You should read about them sometime in the book of Genesis, maybe even today if you can read by yourself and your parents will let you.
Lent the church year for children