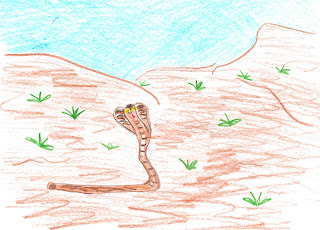 1 Moses answered, "What if they do not believe me or listen to me and say, 'The LORD did not appear to you'?" 2 Then the LORD said to him, "What is that in your hand?" "A staff," he replied.3 The LORD said, "Throw it on the ground." Moses threw it on the ground and it became a snake,and he ran from it. 4 Then the LORD said to him, "Reach out your hand and take it by the tail." So Moses reached out and took hold of the snake and it turned back into a staff in his hand. 5 "This," said the LORD, "is so that they may believe that the LORD, the God of their fathers--the God of Abraham, the God of Isaac and the God of Jacob--has appeared to you." 6 Then the LORD said, "Put your hand inside your cloak." So Moses put his hand into his cloak, and when he took it out, the skin was leprous--it had become as white as snow. 7 "Now put it back into your cloak," he said. So Moses put his hand back into his cloak, and when he took it out, it was restored, like the rest of his flesh. 8 Then the LORD said, "If they do not believe you or pay attention to the first sign, they may believe the second. 9 But if they do not believe these two signs or listen to you, take some water from the Nile and pour it on the dry ground. The water you take from the river will become blood on the ground." 10 Moses said to the LORD, "Pardon your servant, Lord. I have never been eloquent, neither in the past nor since you have spoken to your servant. I am slow of speech and tongue." 11 The LORD said to him, "Who gave human beings their mouths? Who makes them deaf or mute? Who gives them sight or makes them blind? Is it not I, the LORD? 12 Now go; I will help you speak and will teach you what to say." 13 But Moses said, "Pardon your servant, Lord. Please send someone else." 14 Then the LORD's anger burned against Moses and he said, "What about your brother, Aaron the Levite? I know he can speak well. He is already on his way to meet you, and his heart will be glad when he sees you. 15 You shall speak to him and put words in his mouth; I will help both of you speak and will teach you what to do. 16 He will speak to the people for you, and it will be as if he were your mouth and as if you were God to him. 17 But take this staff in your hand so you can perform the signs with it."

God is going to set the Israelites free. He has a plan. Moses will tell Pharaoh to let them go, Pharaoh will say no, God will do wonders, and then they will finally be able to go and will take all of Egypt's gold and silver too.

Sounds great. God is going to answer the prayers of the people, he will set them free and he's going to help Moses to do it. What would you say?

"But Moses said, "Pardon your servant, Lord. Please send someone else."" Exodus 4:13

This is after God turns his staff into a snake! Moses says, "But what if they don't believe me?" and God says "Show them this", and makes a wooden stick into serpent and back again.


But Moses still knows he's not the right guy for the job. He is bad at speaking, maybe even stutters. He is afraid.

God doesn't seem to think this is a problem. He made people and their mouths after all. He says, "I will help you speak and will teach you what to say."

But he asks God to send someone else instead.

Do you ever decide that you can't do something before you even try.

But God doesn't give up on Moses even then. For the time being he gets Moses's brother Aaron to help him with the talking parts. Someday Moses will talk to thousands of people all by himself, but God gives him some help to get started.

Remember yesterday when we talked about how all God needs is someone who is willing to obey him? To really obey someone you need to trust them. You need to believe that they care about you and that what they are telling you to do is good for you.


Moses is going to learn that he can trust God, all of Israel is, but it's going to be a long journey.

Who do you trust? How do you know you can trust them?
Lent the church year for children