May 05, 2011
I promised in this post last week, where I was waxing rhapsodic about the multitude of expressions of faith in God, to tell you a story sometime. Not a day later I heard about the Rally to Restore Unity, which is fun and clever, not to mention needed, and has it's own hashtag. #restoreunity So it seemed a good time to tell my story.

My accompanist in college was named George. When you are a voice major a good accompanist is a very important thing to have. George was very good. We spent a lot of time rehearsing. We didn't really hang out socially, but we were friends.

George was married to a sweet girl and they had a little baby boy. George was also Mormon.

Cut to a year later, word spread, somehow as it does, through the college, "George has stomach cancer. He only has a few weeks to live. If you want to say good bye, go to the hospital now."

They hadn't told anyone he had cancer, they were trying alternative treatments, it hadn't worked. Now the end was near.

Now, I grew up praying for sick people to get better. You can doubt my sanity all you want, but some of them actually did. Lots of them didn't. I once watched as a girl with a severely sprained and casted ankle, in the space of about 3 minutes went from terribly swollen to the cast being so loose it was falling off and she could jump on it.

See, that there, already there are people from other Christian traditions who are backing up mentally because that's just weird. And they're right, it is weird. But so was Jesus. I mean, the guy raised people from the dead and healed them and stuff and told his disciples to keep on doing it after he left. I grew up believing that was still our job.

Anyway, there was no way I wasn't going to pray for my friend George to get well. If you've seen it work even once, you aren't going to not try that option when a friend is at death's door. At least, I wasn't.

But he was Mormon, so I was super nervous, because I didn't want to offend him and I didn't know if he would let me. Also, what if it didn't work? I mean, it might not, and then what?

So I took myself down to the hospital and there was a crowd of rowdy music majors hanging out in his room chatting, so I waited. They left. It was just George, and his wife, who's name I forget now, sadly, and me. I was just mustering the courage to ask him if I could pray for him when the door opened again and a lady from their church walked in.

She sat on the foot of his hospital bed and looked at the two of them. "I just had to tell you something. I was praying today, and I don't know why he chose me, but I just know," here she paused to push past tears, "I just KNOW that God loves me. I don't know why he would give me a gift like that, to just know and feel it but I do, and I want to share it with you."

I recognized her. Or rather, I recognized the spirit in her. It was the same spirit that was in me. We were sisters, and I knew it.

So I asked then if I we could pray for George.

"You be the voice Carrien", he said, and stretched his long arms and huge pianist hands to either side of his bed as we all joined hands. It wasn't a great prayer, but it was sincere.

"Father, you say that by your stripes we are healed, so I ask you to heal George. I want him to be here to watch his little boy grow up. I know you can if you choose, so I'm asking, just in case."

I think she recognized me too. We were sisters.

But she was Mormon and I think they believe crazy things. Look who's talking.

But we were sisters.

That day undid me. I could never dismiss another's faith again, as I had so glibly in the past, because, they might be sisters, or brothers. God didn't seem to need them to agree with me in order to speak to them and tell them he loves them, in a way that they know, deep down, that it's true.

Later when I met my father in law I became familiar with a saying of his in his book Authority to Heal and it rang true from my experience. "God seems to be willing to transmit on any antenna we put up."

And with that, I offer my rally to restore unity sign. 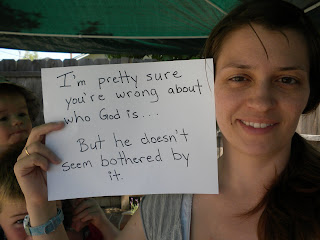 Go check out the rally page. They're also raising donations for Charity: water.
story of my life this life together thing