Skirts vs. Pants- Majoring on the Minors

June 08, 2011
Apparently, in several circles there is a great debate raging over whether or not women should wear skirts or pants. Seriously.

This week I've read several different posts from different bloggers, Catholics, Protestants, conservative homeschoolers of both traditions, (surprise) and others are of the opinion that modesty and sincere faith in God require that a woman only wear skirts because pants are immodest.

In that vein I've also read several posts discussing modesty in general. I've already gone on at length about my thoughts regarding modesty in this post. Modesty Protects? But allow me to belabor the point just a little bit more, since everyone else still is.

First can we please just all agree that what is modest and what is not is an entirely arbitrary line that is drawn differently in every culture, subculture and country. To insist any differently, or that your view of what is or isn't modest is the only correct one, is borderline xenophobic, and definitely ethnocentric. England, France, Australia, these countries have no problem with woman going topless in public. Hill tribe villages in Thailand believe teeth turned black by chewing beetlenut are beautiful and ancient wizened and withered old grandmothers walk around on hot days in nothing but a handwoven skirt. (I suppose they might pass since the clothed half is in a skirt rather than in pants.) They will also gather to watch the American guys in the outdoor shower to see if there really is an anatomical difference in certain areas. (Aaron and Sean experienced this first hand.) In the case of the hill tribes, most of this is really quite innocent, though shocking behavior for North America perhaps.

And yet, here in the United States there is heated debate over whether pants are too revealing, too enticing to men and should a sincere Christian woman be seen in them? WTB! What the Bloggess?

Which brings me to my second point. It is a dangerous trend I see for women to take upon themselves the responsibility for what is in the heart of a man. Yet that is what youth group leaders preach, that is what male pastors preach, that is what Muslim Imams preach. "You women don't know how enticing your form is to men. You need to help them out by denying the beauty that God gave you and turn yourselves as plain and unattractive as possible. It is your fault that they struggle with unclean thoughts and actions. You as a woman, the way God made you, your very presence can defile a man. So it's up to you to be careful."

Personally? I find that line of thinking about as offensive as those who say a woman who is raped was asked for it based on how she was dressed.

Not only that, it's demeaning and disrespectful of men, our sons, husbands, fathers, and brothers, first to shame them for noticing the female form in any way and appreciating it and second to equate them with little children, no more in control of themselves than a 2 year old, who thinks everything he sees belongs to him.

Alongside this blaming of women for what is in the hearts of men is the effective stripping away of men's inherent dignity, nobility, and God given instinct to protect and treasure women. Seriously, how insulting, and how typically female of us to take on responsibility for something that is not really ours to be responsible for.

Suppose my son fails or struggles in an area, perhaps sports, he gets angry when he loses and hits someone. How helpful is it for me to pat him on the head and say, "There, there, I know you can't help getting angry. It's how your brain is wired. You were made that way and it's really those other player's fault that they aren't being respectful of how you were made and what you struggle with. They should have let you win because now they've caused you to stumble again and that's not biblical."?

Yet that's what we effectively say to Christian men when it comes to sexual temptation. "Because of the way God made you, you have no control over your thought life, and if only all women wore burqas, then you wouldn't struggle so."

"Because of how God made you, and through his spirit in you redeeming and renewing all parts of you, you can control your thoughts, you can be free of addiction, you can see the women around you as wonderful, precious, real human beings that you care about so much you can't imagine demeaning them in such ways."

Here's a another question. What about the men who wish their wives would dress less modestly? For example, I dress far more "modestly" than Aaron would prefer. He buys me bustiers and corsets and absolutely loves it when I wear them out on a date, or a dress with a plunging neckline, usually borrowed. My usual standard of dressing is entirely detached from any desire to please my husband. Truthfully, it's a mix of what I feel comfortable in and my concern for how other people perceive me and what they would say about me. Lets take that a step further. I'm dressing "modestly" based on other women's standards not on mine or my husband's. Which leads back to my first point about modesty being an entirely arbitrary sets of rules, often made up by women. *

What about the fact that my husband wears skirts, in the form of kilts, lungi and sarongs? How does that factor into this discussion? Modest or immodest? And while we're discussing the guys for a moment let's talk about this double standard of expecting our girls to wear skirts while our boys go shirtless. Men's pants hug and bulge and reveal also. Perhaps they should all wear skirts as well. Why is the conversation always about women's clothes? I am tired of hearing that men are more visual as an answer by the way. Woman are visual too. Women are tempted too. But the double standard remains. If we're going to say it for one gender we should say it for both.

Here's my 3rd point for today, and the most important I think. Do the people so seriously discussing this issue have any idea what they are doing to the gospel by worrying such small details to death? If God had a specific directive about how a woman dresses, I'm pretty sure he would have put into the Bible, "Woman should not wear pants."

What is in there is a directive to women to not be obsessed with outward adornment, I'll venture that the pants versus skirts debate is included, and rather let our beauty come from our character, and our heart. In other words, it's what's inside the heart of a woman that counts, not what's on her body.

A wise man, aka my father in law Ken Blue, once said, "Be careful of those people who major on the minors, and minor on the majors. They are dangerous."

For example, a person in Aaron's extended family, while pastoring a very large and prominent church, wrote a book about manners, the importance of saying please and thank-you, etc. It was a best seller by the way. However, while he was writing this book, about the importance of manners in today's society, he was simultaneously, quite politely I'm sure, cheating on his wife with his secretary.

Skirts vs Pants-relatively minor
Having a heart of compassion and gentleness, and good character - Somewhat major

So can we all just please stop with this whole discussion of what it is proper for a woman to wear? Could we maybe even trust the God who draws her to Him to teach her what she should do in that regard, just as he teaches each of us, even if it differs from person to person?

Could we direct all that passion towards something truly major and valuable? Maybe the orphan crisis, world hunger, human trafficking, injustice, clean water, kindness, dignity, love, and gentleness. There is a lot of good to be done, take your pick.

Or am I wrong? Is modesty a major issue? Am I missing something?


*I read that paragraph to Aaron and he very helpfully commented that "Of course it's arbitrary, it's made up by women."


Here are a few reasonable and graceful posts that I enjoyed reading on this subject this week.

Grace for the Scantily Clad

And Rachel Held Evans relevant, though not quite on topic, post

Idols of Paper and Ink

Update. I found this picture. It seemed to fit. 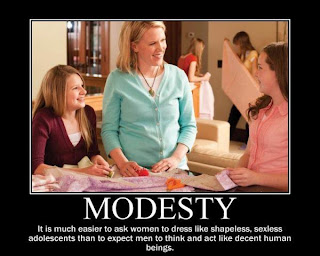 a piece of my mind gender issues I have to wear something?