And Finally, Christmas decorating - a short tutorial on not spending anything at all 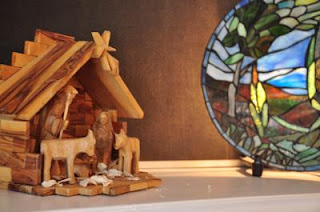 Last Friday night I unplugged! I decided any work I wasn't finished with could wait at least one day and shut down the laptop. It has been years since have gone that long without internet while at home. I opened it briefly late Saturday night, but only to forward the lesson plan to someone else as I called in sick to teaching Junior High Sunday school the next morning.

The result of this crazy and drastic measure? Well, I spent a lot of time reading to my kids, and we went for a walk and stopped at one of the most well preserved adobe rancho houses in San Diego county for a tour and got a sneak preview of their Christmas decorations.

But then we came home, and I noticed all sorts of housekeeping I've been negligent about with this past month or two of NOTHING BUT FUNDRAISER CONCERT AND CHARIS PROJECT WORK MORNING NOON AND NIGHT.

Nothing like decorating to inspire some actual dusting and cleaning in rooms that haven't been given anything more than a quick once over and swept every so often since September? [full disclosure - It hasn't been me cleaning them. The kids each have a room to pick up once a day before dinner. Without them we'd have descended into total chaos way before now.]

That's a long way to get around to saying that on Saturday we totally did the holiday decorating thing. 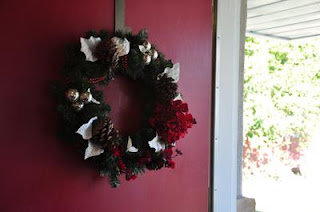 But there was no way I could take down the nativity sets before doing some serious de-cluttering and arranging of the piano and the mantle. I really should have taken a before shot of that mantle.

I forget how fun it is to do little creative things like this around the house until we do them. 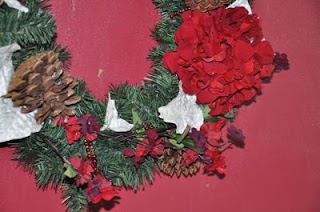 The wreath is from last year. I substituted the bow for the fake hydrangea blossom and little red flowers this year. Little desperately wanted us to get the white poinsettia also so I did. But she didn't want to just attach the pretty white flower to the wreath no. She cut every individual petal off and carefully arranged them where she thought they ought to be and then I wired each of them on for her, because I like to encourage her budding design sensibilities. Also, I didn't want her to remember crying because mommy said no to her decorating contributions. Total cost of silk flowers, 50% off at Michaels? $8. (OK I spent just a little bit.) 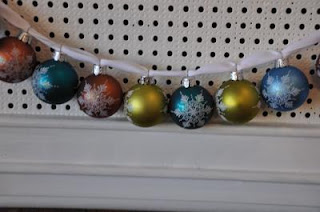 I've wanted to try an ornament garland, but those get pricey. This miniature version made from plastic ornaments also at 50% off is pretty cute I think, and I got the girls to string it on a ribbon so they had something else to make while I cleaned and dusted. [$5 for the ornaments.]

So I cleared the mantel and kept wishing that I had either gotten around to blowing up and framing a decent photo to put above the mantle because there are ugly outlets up there. (Apparently it's the thing now to put big flat screen TVs on your mantel. I wouldn't know, I don't own one.) So then I wandered through the house in search of something big enough to cover over the outlets that I could use. Along the way I wished I had a mirror or chalkboard, and that's when I remembered. 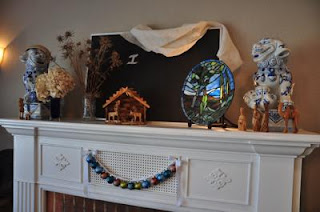 I have a big felt board. Was it big enough? Why yes it was.

The burlap draped over there is a scrap from something else. I first tried to see if it would stick to the felt or not. I just liked it there so there it stays. When I took this photo today the Girl wasn't yet finished cutting out all of the letters we put on it. Now it says, "I am the light of the world" Jesus

We almost didn't have letters, and talked about needing to buy white felt. A few hours later I was finally throwing into the trash the bit of sparkly white stuff that Aaron's grandparents always used to put underneath their nativity set which they gave to us a few years back. I think I just kept it for packing material. I have this thing about putting creches in snow you see. It's just too jarring for me considering there wouldn't have been much snow in Israel. But I remembered just in time, and it's what we cut our letters out of. 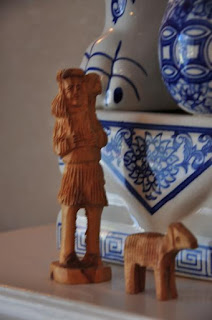 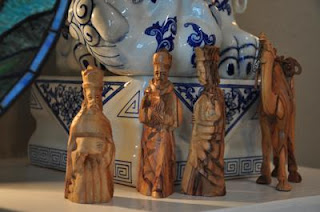 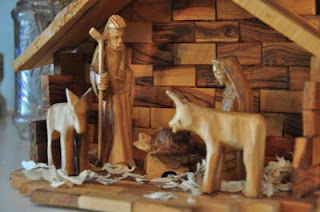 Aaron's grandparents purchased this nativity set in Israel. It's hand carved out of olive wood. We were the lucky recipients of it when they downsized a while ago.

I think I may need to unplug more often and remember my creative side again. Oh, and to hang out with my kids, that part too, I guess.