St. Nicholas Day - How our family deals with Santa Claus

If you've been reading here a long time you would know that we don't much go for the standard commercialism of the Christmas season. [Ideas for a non Commercial Christmas] We don't give each other Christmas gifts for example. We try to find a way that our family can be a gift to others instead. We don't do the Santa thing either.

Now, if you do I'm not going to tell you not to, don't worry. There is something to the wonder that a child is capable of and the way they so sweetly believe that I can understand why parents love doing the Christmas morning extravaganza for them to wake up to. I continue to try to find other ways for them to experience wonder.

But having struggled with the desire to teach my children to not want things, or think first of their own wants, and also to not be a totally downer mom who never lets them have any fun, ever, I'm pretty content with the traditions we have happened upon so far.

In the beginning they didn't even know who Santa Claus is. They called him the Christmas man when they saw things at the store. Gradually they gleaned little bits and pieces about coming down chimneys and handing out presents and they wanted to know why some kids thought that Santa came to their house.

So I told them about St. Nicholas, the bishop of Myra. You know, the real guy. We talked about how he gave to the poor in secret, most famously throwing a bag of coins down a chimney for a girl's dowry, but also hiding things in shoes, stockings hanging on lines, etc.

I told them how people only discovered that it was him later and that other Christians were so inspired by his example that they continued to give to the poor anonymously, and how they credited St, Nicholas with the gift, rather than take credit themselves, just as he had not taken credit for his own gifts.

A few years back, inspired by the years of reading about how Beck from Frog and Toad are Still Friends (yes, I know she has a new blog, you can click the link. I'm still in love with the old name.) kept all the saint days with her children year after year, including St Nicholas day, I decided to try out a bit of this church calendar liturgical living sort of thing.

Which is how we come to the keeping of St. Nicholas day and how we do it.

Every year the kid's Beema gives them each some money to use to give to someone else somehow. She has them record what they did for her to keep and show them when they grow up. [Actually, I get to record it all because a lot of them can't really write yet.]

On the eve of St. Nicholas day is when we usually work on this. They purchase a toy for a child their age perhaps, to give to a shelter or other sort of ministry and we wrap them to deliver. Or we make something for the kids in Thailand, or whatever we are inspired to do that year. 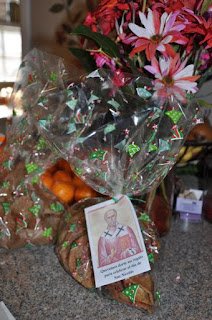 This year we made cookies, chocolate chip candy cane cookies to be precise, and sneakily delivered them to all the neighbor's doorsteps after dark, wrapped up pretty with a note that says something like, "This gift is in honor of St. Nicholas." That's not exact because we decided to do it in Spanish. A note in English when we're the only gringos on the block would be a dead giveaway.

My Spanish is lousy so I'm really thankful that Ashley joined us for the evening to help with the note, which we printed out with an image I grabbed from the internet. She also helped with cookies, which was awesome, and found my kitchen bar counter, which is a total Christmas miracle because I keep trying to get to it and never get the whole thing cleared. It is where I keep the mail after all.

She likes to bring presents for that day. We don't mind at all. 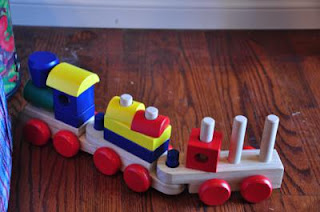 Then it was back home for dessert.

This year I left little presents on the front step in their shoes and they woke me, very early, to show me what was there. They think the next door neighbor lady may have done it. I told them it must be someone following the example of St. Nicholas who doesn't want to be identified.

I love how this works for us, combining giving and care for others with fun mystery surprises for them. They look forward to it for months. Which just goes to show that old traditions may be the best traditions after all.

*Some of you may remember Ashley as Hannah from when I felt the need to give her a blog name.
A Non Commercial Christmas Celebrating Together I want to remember life with short people the church year for children