August 05, 2012
You have no idea, if you've never been married before, what exactly it is to marry another, what it demands of you, what it takes from you, and what it gives to you all at once. It's nothing like a fairytale. 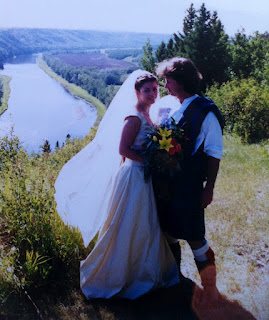 This is, in part, because the things that make a marriage work, the work that it takes to love another person year in and year out are largely invisible to the casual observer.

No one sees the choices made to hold one's tongue, the effort it took to choose to smile and get up to fetch something for another, the decision to forgive and let go of past hurts, and all the times when you decided to put kindness and love above your need to be right.

Only when you are joined to someone, and spending your days with them, do you see how herculean is the effort required to learn how to love them truly, in the ways that mean the most, and to lay down your life to serve another.

It's not an easy thing, this being married, which is why so many marriages fail, and so many avoid it.

But they don't know the gift it is to receive love from someone trying just as hard to serve as they are, to know so well a person's mind that all it takes is a twitch of an eyebrow to tell volumes, and most of all to grow into the kind of person who has the strength to be the kind of spouse they can choose to be.

I told the story here of the 3rd time Aaron proposed to me, but I don't think I've ever finished it. You see, after he asked me again to marry him again, when I finally was getting a clue as to what that meant, and what it would require, I didn't say yes right away. I told him I needed time to think about it. I knew myself well enough to know that if I didn't give myself time at this moment to think that it would be a back door for me in the future when I was unhappy. I'd tell myself that I really didn't know what I was getting into, and hadn't had enough time to make a decision and therefore was justified in backing out of it now. I didn't want to do that. 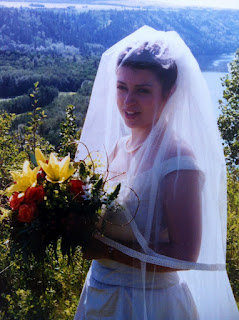 So I asked him to give me 24 hours. Only, when he came back I still didn't know what to say. I knew that if I was going to marry he was the one, but I really wasn't sure I wanted to be married at all. So we went for a walk and a talk.

What I really wanted was for God to tell me to marry this man, and then if I didn't like it later I could blame it on him, and wouldn't have to take any responsibility for my own decisions. Though I didn't put it in those terms at the time.

I can't describe how terrifying that moment was. It was like standing in mid air with no sight of a bottom or place to land. I literally cried for at least 5 minutes, the big, horrible, painful sobbing kind of crying.

But as the fear ebbed a thought appeared to replace it. "In the end what matters most is how well we loved God, and loved others. Will marrying this man that I love move me closer or farther away from that?" 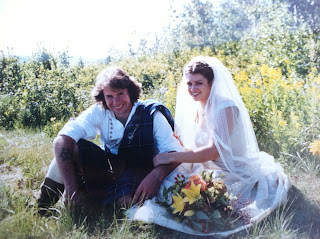 After that it was easy. Marrying someone seemed to hold far more opportunities for loving others than not marrying, so I said yes, for the 3rd and final time.

Twelve years later, here we are, and the opportunities to love, to grow, to die to self and open up to more life and joy than I knew were possible then have been abundant. 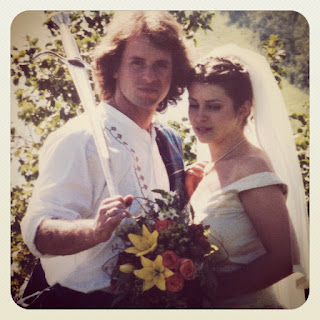 I'm startled sometimes to realize that 12 years in Aaron is still thinking about my happiness, that he gets me, more than anyone else, and he doesn't think the things I care about are silly. That part, that everyone wants out of marriage, that part about having someone who knows everything about you and loves you anyway, it's real. It's worth having. It's worth all the work it takes to get there. Really it is.

Happy Anniversary Aaron. Marrying you is one of the best choices I ever made. Thank-you for everything you do.