I went out for ice cream and came back with a homeless woman. 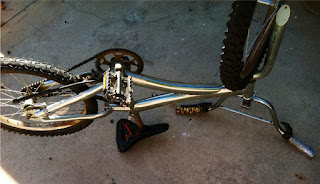 I would never have seen her if I hadn't gone to get ice cream. Aaron was doing that thing he does at night after the kids are in bed where he wanders the kitchen, opening and closing things and then walking away. So I asked if I could get him anything.

With Bam Bam strapped into the car we headed to the store and she was sitting there on a corner, 2 blocks from my house, huddled over, next to a bike. I drove on.

She was still there as I drove home, and looked a little longer as I went by again.

It wasn't until I got home and parked that I realized I had left the grocery bag in the cart outside the store. So I drove back. It's not that far away, and this was ice cream we're talking about!

There she was again. She looked as though she was trying to hide, on the brightest corner on the street. I drove on.

The bag was still where I left it and we drove back home again.

By this time I was starting to get that feeling, you know the one, deep in your gut, that says, "Do something."

It's always uncomfortable when that happens.

So on the way back I rolled down my window and called out across the street, "Are you ok?"

She sat up then, face appearing from under the hair she used to hide it. "Yeah, I just don't have anywhere to go."

She said this in tones of resignation, and sadness.

A car was coming behind me so I drove on and parked at home. While I unloaded Bam Bam and the ice cream I told Aaron about her, and that I thought I needed to do something.

So I drove back over to her, this time parking and getting out of the car.

"I just don't have anywhere to go. My bike has a flat tire and so I'm stuck here. I grew up around her but now I don't have nobody or any place to stay. [reducted] I'm just trying to sleep, and stay warm."

It was one of the first days that really felt like fall was on the way. Fog was hanging in the air, it was chilly.

"So why on this corner?" I wondered.

"This house has a dog that barks so I thought it would wake me if someone comes and it's well lit so maybe it's safer."

I stood and pondered for a moment, but already I knew what I was going to say.

"Well, I'm freaked out by the idea of inviting someone I don't know to stay inside my house. But I do have a really cozy tent, and air mattress, and sleeping bag I can set up for you in my back yard. It's really safe, the fence is high, no one will know you are there. I only live 2 blocks away if you want to meet me there."

She only thought for a moment, and then, more like a child than a woman she ducked her head and said, "Ok."

"Mine's Carrien," I told her, "Just go left here, and then right at the next block. Go down to the end of the street and it's the second from the end with the big wrought iron fence. Do you want me to take one of your bags while you carry your bike?"

She handed me a heavy bag and wobbled a little as she struggled with her bike. Once I saw her underway I got in the van and I drove home to meet her. So I didn't see when the police showed up.

*not really her name, I changed it to protect her privacy.
so do something about it we like adventures