June 14, 2013
We have the kind of visa right now that makes it necessary to leave and reenter the country every 90 days. This is something people assumed I knew and so no one told me until 2 days ago. It will be this way until Aaron's work permit gets properly sorted and such.

We kind of thought that 90 days would be plenty of time to have a baby, get documents for that baby, and get the Boy a surgery he needs, whole other story, before needing to renew our visas. This was before I knew that renewing our visas involved a 4 hour drive to the nearest border crossing and a short trip to Burma.

However, there is still no baby, the Boy's surgery date is for the 21st, because I kept putting off scheduling it, not wanting to be in labor when he's in the hospital, and our visas expired on the 24th. This is one of those moments when my brain melts down and I think to myself, "There is no way." And then I cry.

You see, even if we have the baby in the next few days, the odds of getting all the documentation for said baby, including a passport, before crossing into Burma, of all places, in less than 10 days are pretty low.  Plus there's the part about the Boy recovering from what is pretty major surgery and driving for 4 hours in each direction 3 days after.

It didn't even occur to me that we didn't have to wait until the 24th to go and renew until Aaron said something. So we talked about it and decided the best thing to do was to make a run for it as soon as we could. Which is why yesterday found us once again in a rental car, this time headed for the border.

You don't need any paperwork to take an unborn baby across borders, after all.

I really like getting out of the city and driving through Thailand. It's beautiful, and interesting, and Aaron and I used to spend hours together in a car during our courtship/early married days and I still really like doing that with him. We go into full on adventure mode.

The kids were great, despite being crowded in to a small little backseat together, and we had a memorable day.

The border between the 2 countries at the northern most point of Thailand is marked by a narrow, muddy, little river. There's a street market on both sides of this river, in what looks like a big network of back alleys that cross under the "Friendship Bridge". You have to cross the bridge to get to Burma and back. Buildings cling to the river bank and pile up several stories high on both sides, and you could play a decent game of catch with someone on the other side from your apartment balcony to theirs, as long as you never missed. 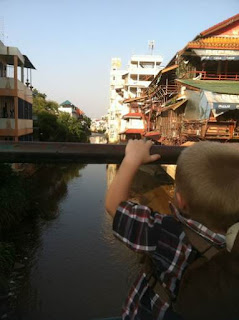 We haven't gone very many places yet, all of us together, since we got here. After all,  given the option of taking all 4 kids to the store withe me or going alone, what sane mama is going to vote for taking all 4? I've usually taken one child along with me in turns so they can have some one on one time and get a chance to get out of the muban and see some things, just not all together. Whenever we do go somewhere though we are a spectacle. People count out loud as we all parade past, culminating in a dramatic exclamation of 5! as they see my belly, usually bringing up the rear. (Five in Thai sounds like Hah, as in hahaha. So that's always fun to hear.)

They point, they giggle, they wave. They reach out to try and touch BamBam, who usually grins at them slyly and tries to hide behind me, or swings a fist out at them, which they think is funny. Some people ask me if they can take a family photo. Some people don't bother asking, they just point and shoot and then come and stand beside us, or one of the kids, regardless of what they are doing and smile and wave for their friends to take a picture. The Girl and Boy are mostly safe from people trying to touch them, they are old enough it seems to be seen as autonomous persons. But Little, well, she's so tiny people think she's very young, and they always want to make friends with her, and often want to hug her, and this makes her pretty uncomfortable sometimes.

To cross, first we went into Thai immigration and they removed our old visas. We had to fill out some papers and Bam Bam played with the fountain and I think 100 or more photos of myself and the kids now live on 10 different people's cell phones.

Then we walked across the bridge, and I smelled something delicious from a food cart that I went back for later, and went into Burmese immigration. Here's where things got weird.

Imagine if you will a very smoky little office, filled with a bunch of guys in bright white polyester uniforms, with all sorts of medals and stuff on them. A rather portly man, also in uniform, waved us inside from the chair he sits on facing the street. The kids all found chairs and sat quietly, they are getting good at this government office stuff. BamBam was his regular charming 2 year old self, not so quiet, but adored by everyone he saw. Aaron brought US currency, because the last time he crossed this border they charged him US dollars to enter. Yes, you pay a fee to enter Burma. They wanted Thai baht, but we didn't have enough on us to cover the cost in baht. Finally they let us pay them in US dollars. Meantime, everyone smiled and laughed at the kids, one man made bird sounds with his mouth, they all said hello and did the regular trying to make friends with my kids who shrank back and clustered close to me as a result.

I was doing something for BamBam when I heard, "Mama!" and looked up to see that one of the men in the white uniforms had come out from behind his desk, picked up Little and was sitting with her in his lap. Talk about disconcerting. Fortunately, Little is a bit Thai in the way she will smile and laugh when she's uncomfortable and get a little silly as a way to get out of it. Suppressing my initial urge to stand up and scoop her out of this strange soldier's lap and run away, which would teach her to be afraid and not go over well in this strange place, I instead smiled and said, "I think he wants to be friends with you."

She reached for my hand giggling, and he tried to hold her close, all very friendly I might add, not sinister on his part, and somehow she and I managed to reach hands and make it silly that she wriggled away from him and over beside me as quickly as she possibly could.

Then he tried to make friends with Bam Bam, who was his usual self and rebuffed all advances with his usual good humor. We were almost done and Bam Bam tripped over the door step and fell on his face on the floor, setting up a nice loud wail. When they saw me trying to help him by putting my, not really cold anymore, water bottle against his cheek, one of the officers brought over a cold can of mango juice and gave it to him to drink and hold. It was really very kind. Though Bam Bam kept yelling until we left the office, and then finally wanted to try and drink his juice while hugging it to his chest and walking.

There were way fewer people smiling on the Burmese side than the Thai side. I've gotten used to the always smiling Thai greeting, and by contrast many of the Burmese looked downright surly, or sad, or both. But they still pointed at us, and counted, and laughed at BamBam as he walked by and looked right back at all of them. 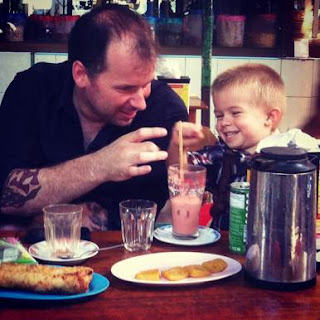 We stopped at a tea house, just a block away from the bridge. Aaron and his brother spent all night in the exact same one 3 years ago when they went to Burma together. As soon as you sit down they put an assortment of food in front of you, and hot pots of tea. You pay for what you eat/open. Burmese milk tea is very tasty. 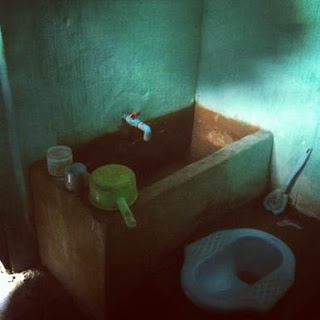 The bathrooms were, well, Thai bathrooms look palatial in comparison. And the flush/rinse water was the same color as the muddy river we had just crossed. Poor Little actually slipped and fell right on top of the toilet she had just finished peeing in. Poor girl. We cleaned her up as well as we could. I always carry toilet paper so I could wipe her muddy legs, and found some cleaner water a bit later to rinse her off.

After that we were eager to get back to the Thai side and begin the long drive home again. It was already much later than we had planned, and we had 4 hours of driving still ahead. 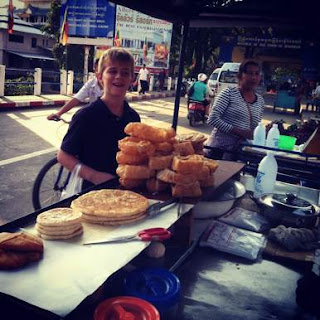 But that didn't stop us from buying some Burmese pastries on the bridge, and these amazing sort of breaded fried onion cakes, kind of like a Burmese onion ring, as well as giant grapes, lychees, shoes for Bam Bam, and Chinese Oolong tea.

The night air was warm, but cool enough to have the windows down, and we stared at the limestone mountains with their crazy shapes as the sun went down behind them.

The dinner stop was in Chiang Rai, at bed time, in the food court of a big, beautiful mall, and all rejoiced to be back in civilization again, with clean toilets, and soap, and well, clean everything.


And then we drove for hours and hours and got home without incident just after midnight, except for a very low gas gauge at one point and passing many stations that were closed before we found one we could fill up at. That caused some nervousness. They close up at night here in northern Thailand. Things really shut down.

It was actually a really fun day, though exhausting, and we have another 90 days before we have to do that again, even if this baby is the latest baby ever in the history of the whole world, that should give us enough time to figure out the passport and stuff. And still, no labor yet.
thailand we like adventures