Showing posts from August, 2013
Show all

More than six hours of driving later, through the rain in the darkening afternoon through the mountains on a pothole filled highway, in a car with no power steering or power anything, we made it to our new house. new house balcony, looking in and looking out We still don't have a truck to drive. It's with the 3rd mechanic now I think. Apparently the first guy could take it apart but didn't know how to put it together. In typical Thai fashion though he didn't just admit that, because then he might lose face. Instead he lied, said he was waiting for parts and then, when pressured, tried to put the thing together and did it wrong, causing even more damage. It was just a cracked engine block before. Now all the valves need replacing too. But we're here, in a lovely house that I had never seen before the night we pulled up to it. BamBam's first response was, "Me wuv my new house!"  That pretty much sums it up. There is enough room for us,
Post a Comment
Read more 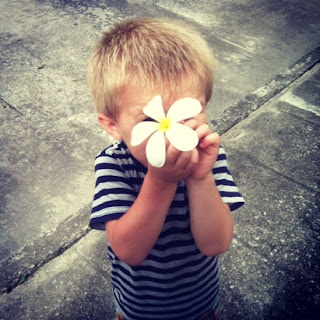 Dear Bam Bam, You are 3 today. Somewhere between 2 and 3 something magical happens to children. Something magical has happened to you. You start using words at least as often as you use pointing grunting and screaming to communicate. We finally get to hear some of the things that go on in your head. Being here with all of these kids has been great for your language development. You've figured out that playing works better when you use your words with people and that was pretty good incentive. Now when I walk by you and you are playing with someone you stop to yell at me gleefully, "Mama, me an [insert name here] are pwaying!" The other lovely thing that happens is that you start peeing more often in a potty than outside of it, even at night! Though for you, that ratio tipped drastically back in the other direction the day you saw your cousin Eli, who is almost 4, drop his pants just enough to pee off the side of the porch while standing on the edge. Your fir
1 comment
Read more

When I discovered I was pregnant last year, just as we were laying our plans for moving to Thailand this spring I told Aaron by texting him a photo of the pregnancy test while he sat in an airport, on his way for yet another business trip away from home. Two days later he called me from the road and said, "I think we should live in Pai. Rachel and Chinua are there and I know how you are after having a baby, you need to have some women friends nearby. Plus it's a cool place and the kids will love it there." That conversation left me feeling so loved, and like I could handle this whole, pregnant in a strange new place thing, because I had someone who understood me and my needs supporting me. So the plan has been to move to Pai. When the house we wanted fell through Aaron took 3 days and went there on his own to try and find us another house that was large enough to house our growing family. He saw plenty of houses, but not any in our price range with more than 2 bedroo
2 comments
Read more
More posts