On Being a Spectacle

Aaron laughs when I ask this. "Does it matter? They're taking pictures of you."

A farang family with a baby and several blond (ish) children causes quite a stir whenever we go out together. The first time I went to the Thai market, all the kids in tow, you could hear the decibel level in the already loud market go up at least 10 degrees when we trooped in the front entrance. The women in the stalls called to each other back and forth, "Do you see this? Do you see all these foreign children?" Or some other similar dialogue. It often isn't even words, just loud exclamations. I've learned how to answer the basic questions in Thai. "He's 2 months old. He's a son. I have 3 sons and 2 daughters. Yes, 5 in all. Yes, I'm busy." 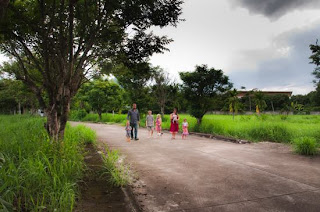 They worry that baby Dek's little legs are tucked inside the sling instead of out. They all carry their babies with the legs sticking out the bottom. But I never see them carry a baby as small as he is that way. I am unable to explain that he prefers being all bundled up inside right now, it's more womb like.

They are lovely really these people and their attention. They tell me the girls are very beautiful, the boys are handsome and cute. They reach out and touch. Oh the touching! So odd, so awkward for us westerners. They put their fingers on Dek's little cheeks, they pat his bum through the sling, they touch hair and try to pick up the littler kids and it's all a bit overwhelming.

The Boy turned to me, halfway through the market and muttered, "I'm tired of people always looking at us all the time. I wish they would stop."

"I feel that way too sometimes," I told him. "But it's just part of living here and we have to figure out how to cope with it."

I think I will start taking pictures of them when they take pictures of us, just for fun. I want to take pictures, but worry about offending. This would be a good opportunity to get the pictures I want without that concern. 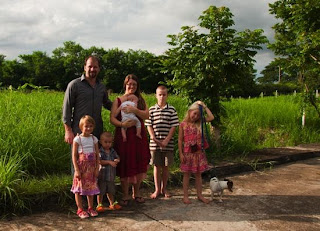 This past month alone:

A woman stocking shelves at the department store just took the baby out of my arms and walked off with him, shouting at her co workers to come and look. I could have held on to him but it would have literally been a bit of a tug of war to do so, and it might have scared him. She brought him back a few minutes later when he got fussy.

BamBam was sitting in the play car of a little play area next to the food court in the little local mall with the Girl standing nearby watching him. A Muslim woman with a beautiful headscarf plopped her little boy into the car beside BamBam and started taking pictures of the 3 of them, reaching out to turn the Girl around and pose her next to the car every time she moved away.

A man selling popsicles from a cart ran his fingers through the Girl's, now short, blond hair and picked up Bam Bam. Bam Bam yelled in protest and reached for me but that in no way deterred this guy from holding him and grinning at him until I was able to rescue him from the overly friendly stranger.

A Thai border guard lined all my kids up and told them to smile as he snapped their photo.

A waitress at a restaurant went from saying hello to the baby to reaching for him to hold as I got everyone settled. I let her, because she was trying to be helpful and she looked like she had held a lot of babies before. I thought she would give him back once we were all seated and I had Bam Bam squared away but she just walked to a nearby table, sat down, and held him until we were finished eating and I asked for the bill. I was on my own that day without Aaron's help, and I think she thought I needed a break. It's hard to tell with my limited language skills.

A foreigner, European I think, asked me to line up all my kids so he could take a picture of my "beautiful family". I declined that one, we were in a hurry to catch a bus and I wasn't going to risk missing it just so some stranger could take pictures of us.

The ladies at the little squid stall, just up the hill from our house, sat us down on chairs to wait for the squid to cook and took our pictures while we waited. (Fresh grilled squid on a stick for about 30 cents US. My seafood loving kids spend their allowances on this kind of thing.)

My favorite though happened at the border market. Aaron had gone ahead of me with all the kids and the baby and I was trying to find a toilet. The first lady I asked didn't understand my question at all, but then looked at me and asked, "Baby?" while making a cradling motion. When I nodded she helpfully pointed me in the direction my family had gone, sure she had answered my question successfully.

The kids are thus far gracious about the whole business, more or less. They submit to the posing and the questions and the marveling over their hair, seeming to understand that it's all well intentioned. (There was a great deal of marveling over the Girl's hair back in our Hispanic neighborhood in California too so she's kind of used to it.) They definitely don't mind when someone gives them a free snack because of it. But we are working on figuring out together things they can do when they are truly uncomfortable and feel alarmed by some of this attention. Perhaps we should start by learning how to say a few important phrases like, "Please, put me down." 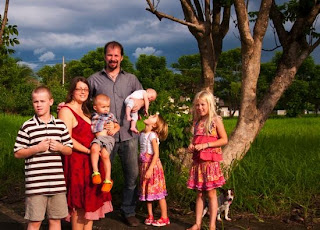 Or better yet, "Are you a professional photographer? Because we would sure like some well done family portraits. And since you're taking our picture anyway..."
on being a spectacle we like adventures