November 05, 2013
We decide to eat lunch in a sit down restaurant near the border the day we renew our visas, rather than a street stall, mostly because we also need a bathroom. Six ladies and one girl, in coordinating tribal shirts, seat us and bring our dishes, ice, drinks, menus, etc. The girl, maybe 13, maybe older, she sits at a nearby empty table and watches us eat. The restaurant isn't very busy. Most tables are empty. I glance at her as she watches us, in between juggling baby, toddler, and food. She just sits, and watches. It's a school day. I wonder if she goes to school. I wonder if she ever gets to eat the same kind of food my kids are pushing around on their plate and probably won't finish. We've ordered 4 different meat dishes to go with our rice. Not a lot for 7 people by American standards, but probably extravagant for many here.

Does she sleep in the house behind the open air restaurant? Does she push some chairs together after the customers go home and sleep there?

In the street there are two very thin Burmese girls. They each hold a baby or toddler on on a hip and they follow us around with their hands out pointing at their mouths and saying over and over again, "Hello. Hello. Hello."

They followed us to the restaurant door, and they follow us again as soon as we leave. Aaron gives the kids some money to gives to them.

I know that giving money to beggars almost always compounds the problem. I know that it feeds a system that is damaging to people. But it feels better than doing nothing. I want to talk to them, but I can't speak Burmese. So I smile and bow and walk on as they press up behind with their hands still out until we get into the car. I blink back tears and swallow them down as we move on away from them. 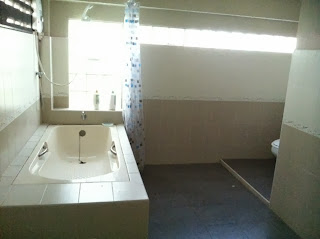 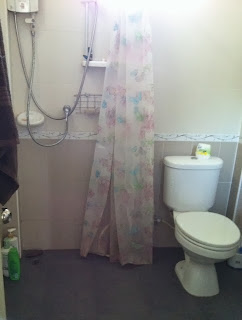 This is my neighbors bathroom, as seen from my living room window.
I didn't realize it was their bathroom until one day I happened to look out the window and saw a little boy standing naked in the yard throwing water on himself. Another time it was a woman with a sarong wrapped around her body for modesty as she bathed.

Our neighbors on both sides live in teak houses on stilts with broken bamboo walls and a tin roof. Their water is in tanks like ours, but they don't have it running into the house and out of the tap. They have electricity. We can hear their radios blasting all day and night.

I have a nicer bathroom. The person who built this odd house we rent took care with it. They made it beautiful. They could afford to build something nice on a property the same size as the neighbors with the tin roof. We could never afford a house this size in San Diego. We pay less than a quarter of what we paid to rent our last house that was half this size.

Do they think of themselves as poor I wonder? They are better off than many, many others around here.

A friend who works with another organization here in this city tells me about a family that was trying to sell their one and a half month old baby yesterday. The social worker they work with told them about it. She went to meet with the family. They wanted her to take the baby to the children's home her organization runs and give them some money. They needed 1500 Thai Baht, roughly $50US. Of course that didn't happen. She wouldn't give them money in exchange for taking their child somewhere safe. There are laws here. The police don't allow that kind of thing if they find out about it.

She offered instead to help the family to get food if they would keep their baby and not try to sell it. She said they were happy with that suggestion, and that they moved in with some people in our little village. She doesn't know for sure yet if it's the house with the bathroom I showed you above, or the one just down the hill from it.

My heart squeezes in my chest. I can't imagine trying to sell a baby so new, so tiny. I can't imagine ever being at the point where that would be an option for me. It would tear me in two. I think I would rather die.

Fifty dollars. Fifty freaking dollars. I have had shoes that cost more than that. How could anyone give up a child for less than a days wages in the US for the average person.

But is she a bad mother? Maybe. Probably not. I don't know.

Is it better for that baby to be with her still rather than in an institution? Probably.

It's overwhelming all of this, and I don't know how to think about some of it yet.

One of the reasons I haven't posted much recently is because I still don't have a framework in place to understand things. I want to understand what I see before I talk about it. But that's not so easily done, and I know I don't understand a lot of it. I don't want to impose my worldview on a culture and situation I only see the surface of. To do so gets in the way of finding workable solutions.

So I observe, and try to reserve judgement, and try to build a framework that will help me navigate all of this with compassion and wisdom.

I realized I can at least tell you what I see.
so do something about it thailand this life together thing