January 31, 2014
He took me out for ice cream for my birthday, trying on phrases in the same way he’s trying on manhood for the first time this year. “It’s on me,” he says in the card. He’ll pay, with money he earned. 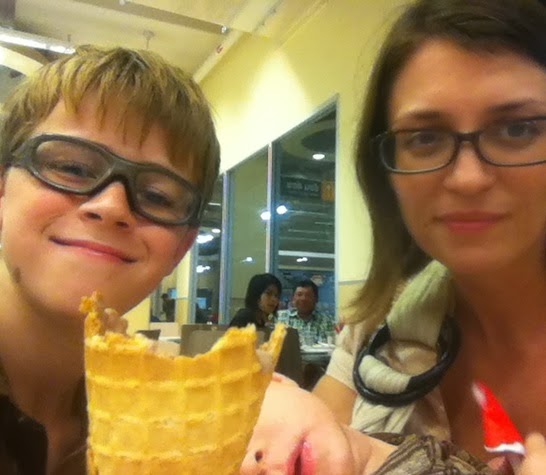 “What can I get?” I ask him in the DQ line. I don’t know how much he has stashed in his pockets.

“Oh, anything for 40baht or less,” he sort of drawls, trying to be casual. I suspect that if I do order something for 40 baht that he will not have much left for him. His daddy slips him another 20 from behind, where he and the other kids wait to get ice cream too, but try not to intrude on our ice cream “date”, even though we’re all at the mall together. His quick smile and quiet, “Thanks” confirms my suspicions.

So I order the blizzard in a waffle cone, and he orders the same, in a different flavor, and we wander over to a corner of the food court and sit down. I am picturing his first date in my head. I think he’ll be remarkably similar to the way he is right now, trying to act casual, but proud of being able to buy me something on his own, and talking mostly of how cool the thing that he purchased for her is. Not because he’s trying to impress, but because he truly thinks it’s cool. Waffle cones are not an everyday occurrence in this family, and it’s to be savored. And why do they give you spoons with ice cream cones here in Thailand? It’s like they don’t understand how you’re supposed to eat an ice cream cone.

I catch glimpses every day now of this kid growing up, in the ways that matter. The way he prays for me to be able to adapt and be strong and at peace in this strange new place that he’s already at home in. He’s still a kid, chronically forgetful, often needing me to nag him to remember his chores, sometimes foolish, sometimes mean, almost always loud and silly. But there is this growing shadow of maturity looming under of all of that, and it cautions me to tread softly, to begin to forge a new way of relating and communicating that acknowledges his encroaching adulthood.

I feel like there is some urgency to my listening to him this year, while he still talks in a stream of consciousness, to keep this pattern of talking open for as long as possible. The time approaches when he will have deeper things to discuss, and more adult things to wonder over. I want to be privy to those thoughts too, and those struggles. I hope I can be worthy of his trust and confidence for many years to come.

I look forward to the day he tells me about his first date, where they went, what they said. It will be overlaid by my memories of today and how he looked as he bought me ice cream.
the parenting files this life together thing