June 15, 2014
When I was younger I went to one of those church leadership types of schools that had no grades and was basically a series of week long seminars. There were people of all ages, from many different parts of the world, and we lived in a motel near the church, 3 to a suite. (In my later years I think that money would have been better spent on a plane ticket over seas, but that would ignore the fact that I did experience a great deal of personal growth during this time, mostly through my interaction with some of the people who were there.)

One of the things that we did as part of our "ministry training" was go out and spend time talking to all the street kids that flocked to that city in the summer. There was one little Quebecois kid with giant dreads who was a great musician and we thought he might enjoy playing with our group of students who often had fun impromptu jam sessions in one of the motel rooms. So we invited him to come over and jam sometime, and by we, I mean me and the other guy who was talking to him that day, just to be clear.

One day he actually made the long trek to where we were from the center of town and arrived late afternoon, instrument in hand, smile on his face, ready to play. He had also stopped to buy some lice shampoo first and asked to borrow the shower in our room.

I guess it takes some experience, which I didn't realize at the time I had more of than most of the other people there, to get a good feel for whether a person is someone to be cautious around, or just in need of some help.

This kid was just cold, and tired, and looking for some friends, in my opinion. It was getting pretty late, and it was a long way back to where he normally slept, so I looked across the room that was full of people and asked the kid from England, who was sharing a room with a guy from Japan, and had a vacant couch, if the kid from Quebec could crash on their couch for the night. I would have easily given him the floor in my crowded suite but I knew it would totally freak out my roommates, not because he was a homeless kid, but because he was a guy. That was my line of thought anyway.

Well, that simple request about a couch, to which he initially answered yes, by the way, blew up into an "incident" of epic proportions, in which he felt really uncomfortable about the whole thing, went and talked to other people about it, who talked to other people, which led to hushed conferences on balconies about what to do with this poor kid who thought he had a place to sleep that night.

In the end "it was decided" that they would drive him over to the church and set him up in the cardboard boxes on the loading dock. I was so upset, and angry, at all this stupidness, and the way this person ended up being treated like he was sub human.

In a conversation a few days later, knowing I was still upset at the situation, the kid in question said defensively, "I mean, be honest, it's not like you were asking me to do something that you would have done yourself. I mean, you wouldn't have let him stay in your room."

That's when I exploded, "Yes! I would have. I would have totally let him stay in my room if there hadn't been other people in there who would have been bothered by it. I grew up letting homeless people sleep at our house. It's what you do."

It wasn't until that moment really that I understood how strange my childhood was, you know, compared to other people.  My dad built a little temporary room in our basement out of wooden screens so he had a place to offer to someone he met who needed a place to sleep for the night. He wasn't indiscriminate, he didn't invite people he thought would be a danger to his family, but our house was open to people in need.

So I grew up with the feeling that it was a perfectly reasonable request to ask a friend to let a very young, newly showered, homeless kid to use his couch for the night.

Guess what my dad does now?

He owns a giant old house downtown in the city where I grew up. It's his art studio and gallery. It's also for the past 20 years almost, functioned as a half way house, a get off the street free card for many, many people over the years. It got to the point that his house was on the referral list for men getting out of jail, or rehab, or one of the half way houses, who needed an affordable place to stay.

He's also staff and night supervisor for a place called Haven that, you guessed it, gives people a place to stay off of the streets.

The number of alcoholics and gambling addicts and drug addicts that owe my dad back rent at this point would make him pretty wealthy I think, if they all ever paid up. There have been guys that I thought he ought to kick out of his house and his answer was always a hopeful, "We'll see. I think God is doing a good thing in his life right now."

It started with Dan, a big stumbling drunk native guy, standing on dad's porch trying to bum money for more beer at the liquor store 2 doors down. Dad invited him into the kitchen for one of his hamburgers instead. (For years after my parent separated the only thing my dad knew how to cook were hamburgers, so he ate them every single night.)

By the end of that hamburger dad had decided to offer Dan a room at his house.

Dan ended up living with dad, on and off, for more than a decade. He'd try leaving and making it on his own, and then come back again for a while, and then try again. While he was a fixture, there were dozens more coming and going with my dad feeding hamburgers to them all. Christmas at dad's house always included several of his boarders in the celebration. They all get a gift. Dad finally learned how to cook, and enlisted help from friends, and started feeding them Thanksgiving and Christmas dinners. "The House" took on a life of it's own.

You guys, it's taken a while to realize this, but I am the way I am, largely because my dad is the way he is. I have had a model of selfless giving in him in almost every circumstance. I think it's normal to live your life in service to others, because that's what he modeled for me.

It's not like mistakes were never made, or that he's a perfect example. Better than that, I was able to learn from watching him try, and fail, or succeed. As a parent I finally realize that getting it all right all the time is not nearly as valuable as living authentically the things you say you believe, and being honest about your missteps along the way.

So thanks dad, for your constant support, your steady example, and your loving heart. You are probably the only one who read all the way to the end of this super long post anyway, because you're a good dad like that. I'm glad that you're mine. 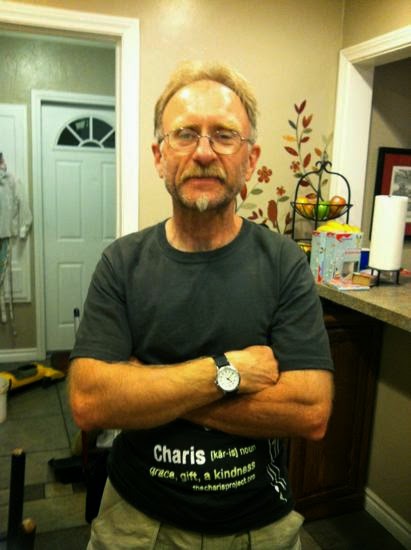 Family Culture story of my life this life together thing