July 08, 2014
I probably shouldn't have tried to go to the mall after art class yesterday. (Hooray, homeschool co-op has an art teacher now!) Dek was doing that early stages of fussy thing he does when he needs a nap, and I was already feeling that rising internal pressure that happens when I'm tired and just want to be by myself for a while. But it had been weeks since I took the kids to the store. Aaron keeps using the car for things like work, and meetings and stuff. I keep using the car, when I have it, to get to the office, and meetings, and stuff. The kids get a little restless sometimes when their entire existence is simply the circuit between our house, home school co op classes, and the little village up the hill. So restless that they beg to come when I go grocery shopping. Also, this particular store/mall/movie theater has a Dairy Queen. Sometimes a 25 cent ice cream cone is exactly what you want, even if you know that it's probably devoid of milk or cream altogether and is mostly flavored palm oil.

Quick aside: This little mall that we go to to buy western things, like flour, and really expensive milk that we try to use sparingly, and oats, is the biggest shopping center this side of the mountains that separate this city from the rest of Thailand, and maybe all the way to Yangon, the former capital of Myanmar. By California standards it's barely a mall, one large department store, a food court downstairs, the various little shops that you find in malls, a tiny arcade, and a movie theater. You can walk the circuit of it in 7 minutes. So, not a very big mall. But on Saturday morning there are tour vans with Myanmar license plates filling the parking lot, and people who have just crossed the border 3km away, just to see it. Aaron took our store manager there for lunch one day, he came from Burma, to a refugee camp, to working for us, and he was overwhelmed. "Please sir, I think you should lead. If I tell my wife about this place she will not even believe it." This was just in the food court. He still hadn't seen the rest of it yet. Every so often I will find myself waiting to get on the escalator behind someone who has never ridden on a escalator before. They will stand there, watching the steps as they keep moving away, trying to figure out when to step on. Sometimes people don't know that you have to step off at the top and they fall down. It's fascinating, really, the contrasts between what I take for granted and what other people are amazed by.

Anyway, on this particular day I decide to go to the mall and get things I need to stock up on, flour, salt, the good kind of fish sauce, etc. I start by buying the kids ice cream cones.

While we sit eating the girl who works at the print shop I usually go to comes over to say hi. She wants to know if we have English classes at our office because since she finished college she has forgotten her English. Her English is actually very good, which is why I go to her print shop to get work done. It's less of a gamble to order work from her because she at least understands most of what I'm saying, some of the time. My Thai is still woefully inadequate to the task of saying, "No, this image is too pixelated, please change the resolution." Over time we have had more in depth conversations about what we're doing here and that I home school the kids, etc.

She tries to make friendly conversation while Dek fusses, the kids interrupt, and everyone eats their ice cream. She wants to come over to our house on her holiday to practice her English. She says she'll and help me with all the kids too. This is Asia, people you barely know just might invite themselves to your house for English lessons. I might do it. It could be fun. Except, of course, for the fact that conversations with a language barrier are exhausting. You have to put all your energy into the listening and the speaking, trying to understand the strange pronunciations of your mother tongue, and make yourself understood. I'm already feeling drained from that short conversation in a crowded busy place.

Finally the ice cream is almost done and we can head upstairs to get groceries.

Dek has taken to screaming by this point because I bought myself an iced milk tea with boba pearls in it and he thinks that I should let him have the cup, the straw, and the entire contents of my drink so he can dump it on the floor. (Here I thought grabbing a caffeine infusion would make the rest of this little adventure easier for me.) He keeps reaching for the straw, and screaming as loud as his little voice will allow in the middle of the store. I start gulping the contents so as to be able to give him the empty cup to play with. Then BamBam shows me his hand, with the the broken remains of an ice cream cone in it and ice cream leaking out all over his hand and starting to drip on the floor. He's been nursing that last little bit way too long.

I leave Little and the big kids standing with the cart while I grab Dek and Bam Bam and run around the corner in search of a tissue. I get back a minute later and Little is hanging her head behind her arms in order to avoid a Burmese father with his phone out, trying to take a picture of his two little girls next to the farang girl. She's having none of it today, and keeps hiding her face and stepping out of the frame. Those two little girls, with perma smiles plastered to their faces, keep following her around as their father coaches them, trying to get this picture. Little keeps playing her avoidance game. I smile at the little girls, trying to be at least a little bit friendly, and make this whole moment just a little bit less ridiculous.

I tell her they will go away if she will just stand still for a moment. She is adamant that she will not consent to this so we start making our way through the store, she with her head down, hair covering it, hanging off the side of the shopping cart, Dek screaming and reaching for my drink still, and these two little girls, smiling as though their lives depend on it, tailing as close to Little as they can manage, while their dad walks ahead trying to take the shot. I'm starting to feel a bit like that guy in the story of the Golden Goose who ends up leading a crowd of people stuck to him down the road.

I tell the dad she's feeling shy today. I learned that Thai word as soon as I could, just for these sorts of situation. I ask the Girl if she will just do us all a favor and pose for a photo with the little girls in Little's place. I'm sure she'll be an acceptable substitute. She refuses.

Eventually they give up and move on and I calm Dek by giving him my empty cup and straw and we work on our shopping. I take deep breaths to try to get my self calm after the standard screaming baby induced cortisol response, amidst the normal chaos of 5 kids in a grocery store all asking me to buy things that are way too expensive and not on my list.

The produce lady with the garish makeup comes out to greet Dek and and talk to him for a minute, as she always does. He's obliging and smiles at her. Two aisles over I spy my boys, and someone has given Bam Bam a big red balloon that he's chasing all over the place, laughing and yelling while everyone watches him. I see people with their phones out taking pictures. 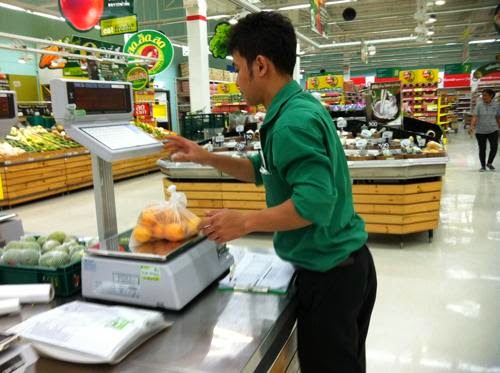 I try to get a few more things, sending the girls to get the vegetables weighed and labelled. Dek is melting down now, and Bam Bam and his balloon are in danger of knocking things over and my kids are SO. LOUD. It's time to leave, because I don't have the energy left to deal with this in the middle of the store anymore, and they are just done. We race to the cashier as fast as possible, avoid everyone we can, which means we still have to smile and say hello at least 30 more times to people near us in the check out line, and head out into the rain with our bags. It's such a relief to shut the door of the car and be by ourselves again as the rain pours down. 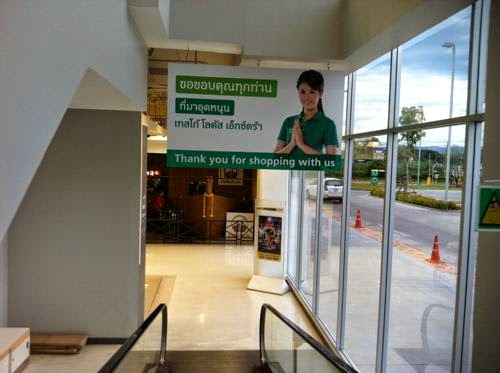 It's not until we get home that I realize I've forgotten to buy half the things on my list. Which means that sometime very soon, like tomorrow, I will have to go back there and do this all over again.
living in Thailand on being a spectacle