Of Darkness, and Hope, and How You Can Help Bring Light

December 08, 2014
Today I met a 14 year old girl, when I was visiting two of the mothers in my birth class. She was squatting in the house next to one of the grandmothers. I thought she was a kid who came in to watch the babies.

The two mothers I was there to see were the youngest women in the class. They were both seventeen. One of these girls discovered that the man who got her pregnant was already married to someone else, before he started sweet talking her. She was so upset over this that she took something to try and abort her babies. That's right, plural. The doctors at the clinic told her she was pregnant with twins.

But whatever she took was only half successful. One of the babies lived. He's a tiny little thing, with intelligent little eyes in his beautiful face. 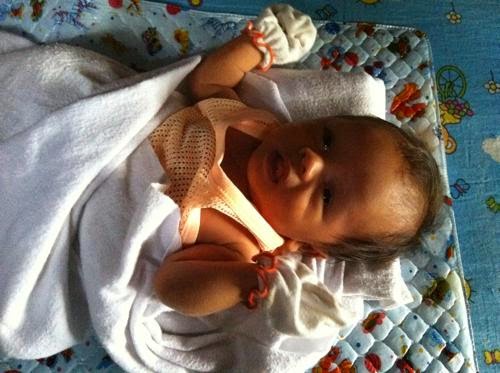 His grandfather is quite taken with him, and insists he will care for and raise his grandson himself if need be. I'm happy for this baby boy and his mother that it turned out this way. She hopes that she will meet another man and this time he will be a good man. It seems unlikely here, in this place where men can abandon women, and children, without consequence. 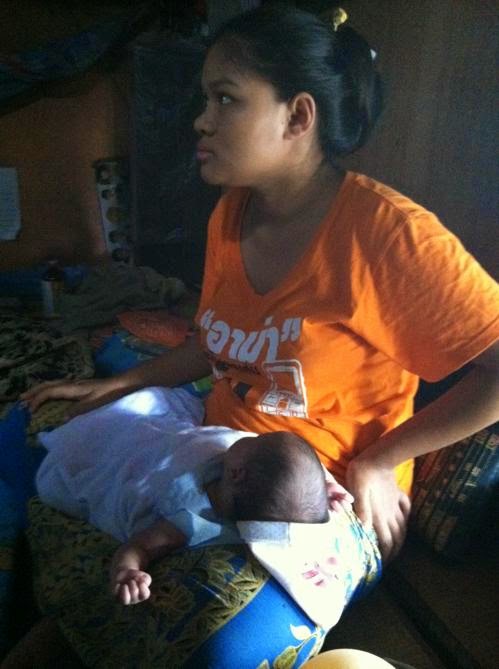 The other girl was taken to the government hospital for a C-section, because her baby was breach. The doctors did what they always do to Burmese women, they cut her right down the middle of her belly. If you know anything about C-sections, you know that that is the worst place to cut, it makes her uterus really weak for any subsequent labors, because of the location. Who knows how the doctors actually stitched her up, and whether they made it at all strong for her. They don't care what happens to her the next time she's pregnant, or about leaving a scar. They don't give her the same courtesy they give to Thai women, giving them a low, transverse cut, and doing a good job and stitching up carefully. They are simply fulfilling a legal requirement to help them, even if they can't pay, and consider it an imposition. So this seventeen year old girl has had her uterus compromised by indifferent, racist, doctors. 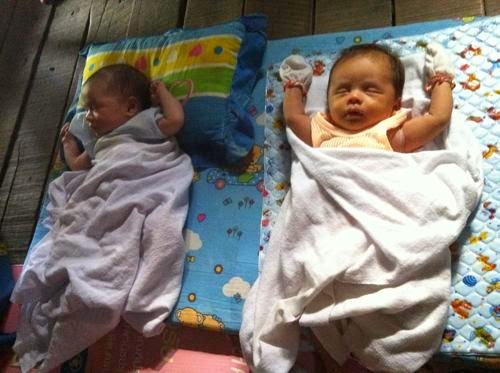 As we were sitting on the wood floor, admiring the 2 babies, the 14 year old girl suddenly left and came back with her 7 month old daughter! She had been 13 when she delivered her, 2 months early.

My head scrambled with the math. If she delivered a baby at 7 months gestation, while still 13, the oldest she could have possibly been when she got pregnant is less than 13 and a half. So that would be like my oldest son, the kid who just turned 13 and is still more kid than teenager, suddenly becoming a parent. I don't even want to think about it.

Then she told me that the baby's father, her "husband", had left her to stay at his parent's house and didn't come around anymore or even give her any money to pay for food.

So I asked how old he is, thinking maybe he's a kid like her who just couldn't handle the responsibility. No, he's 25 years old!!

He's a 25 year old man who seduced a 13 year old child and got her pregnant and then abandoned her to go live at his parents house and get high on the local drug.

There's no one she can turn to. This place is lawless. In Burma she could go to the village head man, who would have witnessed her marriage, and demand support for herself and her child. But here, there is no headman, no village government. There are just squalid settlements and almost everyone is in survival mode. The Thai police don't care about migrants. They do nothing except harass and abuse them.

[The government hospital purposely doesn't stock important medicine that helps a premature baby's lungs develop, because they are required by law to give it to Burmese babies too, and it's expensive. So they don't keep it in stock so they don't have to give it. My friend's baby almost died because they didn't have this medicine on hand when her daughter was born early and her lungs and heart weren't ready. Friends had to drive 4 hours on treacherous mountain roads to bring the medicine back to the hospital for her baby.

Most Burmese don't have a friend with a car willing to drive all day to bring back medicine for them. What do you suppose happens to those babies?]

This was just one part, of one day. I saw many other women today, went to many more places to bring the nutrition packages I've committed to giving to the pregnant and nursing mothers in my class.

We left some eggs and vegetables with the 14 year old mother also. It was the only thing we could do in the moment to help her. I'll be back with more next week.

As we got back in the car, TinTin, our assistant director, and translator extraordinaire, said to me, "Sometimes, I think I hate men."

I knew exactly what she meant, and how she felt. Sometimes I feel the same way.

I know that the gaps between posts on this blog get longer, and longer, and I'm silent far too often. These stories are hard to tell. I often don't know where to begin. I usually tell them over here at The Charis Project's blog. There are good stories in there too, along with the hard. I try to focus on the good.

(I wonder if I should tell you that as I write this I'm experiencing significant gastro-intestinal distress again. I've run to the bathroom 3 times 4 times so far. Or that I spent the last 2 days going through all my children's hair and doing laundry because of lice, again. You know, so you get a complete picture. It's such a small detail compared to the other things, but it's part of why I've lost energy for blogging.)

I'm trying to tell some of these stories today because we need your help.

We're barely scratching the surface of the need with our programs so far. Since I started the birth class I've been swamped with requests to do it again, for more women, in more communities. It's a little thing, but empowering women, and mothers, it turns out, is not such a little thing after all. You can see it, in the way they sit a little taller, and speak a little more confidently after class, in the way they teach each other what I've taught them.

TinTin wants to start a women's center. She wants a place where we give classes every night, real  classes that help women to care for their children and families, and also give them an excuse to leave the house when husbands are drunk, or high, and it gets violent and dangerous. One night some of the women in our class shared with us that their husbands are alcoholics, and it's very hard to live with them. They said they don't mind when class runs late because it gives them an excuse to stay away from home until the men are passed out.

We talked about violence and how it affects children, even if they only see it and don't experience it directly, and how there's always a choice, even if it doesn't seem like there is in the moment. The day after that class, TinTin told us her idea for a place that women could come to learn, and escape, the secret rooms that no one knows about.

We also want to start a nursery school that helps care for these children during the day and gives them a good start on learning. It will help these mothers, who need to work to survive, and help these children succeed. (Kids can come on a scholarship that their mothers, or fathers, qualify for by attending our night classes that help them to parent and provide better.)

We want to do this as soon as possible. But first we need to have another $1500/month coming in in committed donations.

I wrote a post on the other blog that explains all about it. You can read it here. I tried to make it lighthearted and funny. (My heart is less light today.)

Or you can just decide right now that you want to help us do something about this, to shine a light in this dark place.

You can go directly to our donate page, and sign up for a monthly donation to any program that you like, but Community Education is the one that funds the birth class and the center.

The light of hope seems such small fragile thing against the immense darkness, but if there is anything that advent has taught us, it's to hold onto hope. This season will you join us in lighting a candle to hold against the darkest night? Will you help us give these families hope? 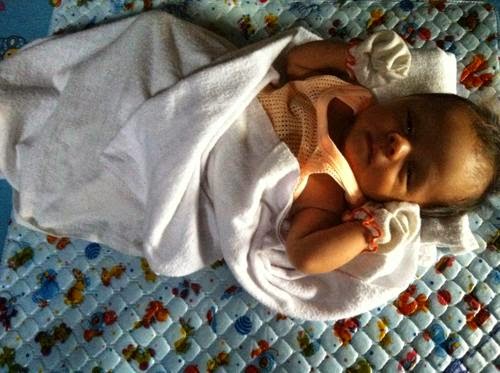 Advent birth so do something about it The Charis Project