Camping out in the Pink Palace 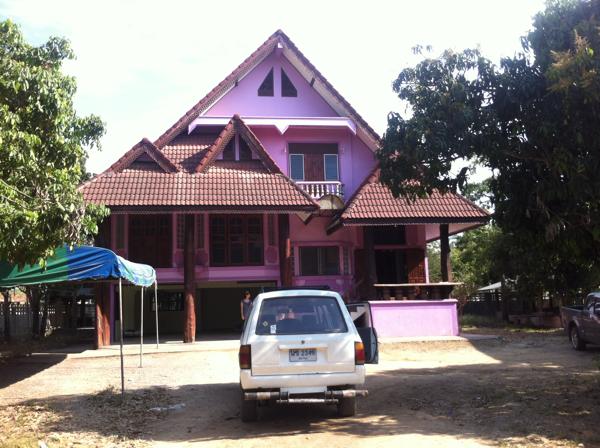 I wrote this a year ago, when we first moved into this house, and never hit publish. I was trying to take a video tour to add to the post so you could see what I was talking about, but it didn't turn out well, and so I was going to try again... you know how that goes. Anyway, we've lived in this house a year now. I'm using pictures I took on my first walk through it before we signed the lease. This is what it was like just before we first moved in.

I couldn't have lived in this house two years ago, and not just because of the bats in the attic, or the flooded basement. I would have been overwhelmed by the squatty potties, the bucket showers, the way I go outside and then back inside to get to my bedroom.

I couldn't have handled the setting up of mosquito nets every single night, because until we find someone to install screen, this house doesn't have any. I didn't know about mosquito coils and how to burn them to keep the clouds of insects out of the kitchen while I prepare dinner.

There are also all the spots that are just so dirty after years of misuse and sitting empty so long.

It's felt a lot like we're camping out in a mansion. Everything is just as much extra work as when you're camping, hauling bottles of drinking water to each child's bedside, trying to keep people from getting dirty again after they bathe, setting up nets, the need to crawl into nets, and spit on the ground to brush your teeth. (Every single one of the sinks in this house, except the kitchen, were torn off the walls when we first moved in. So we spit in the bathroom drain when brushing.) At least now the sinks are fixed, and the doors now shut again since we fixed or replaced all the missing doorknobs.

I think once we have screens installed I will lose the camping out feeling altogether and start feeling at home instead. You know, when I don't have to decided whether to just go straight to bed after the sun sets or huddle in bed under the mosquito net with my laptop in order to keep the beetles from landing on my head and neck while I type. 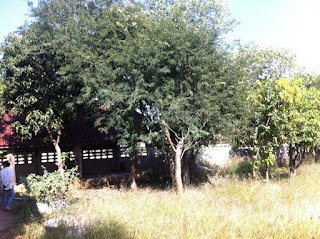 But I love this house. I love the space outside, the whole acre full of fruit trees with a fish pond even for my kids to roam. You know, after we finally get all the broken glass and trash picked up, clean the piles of rotting trash out of the pond, fill it with water and stock it. In other words. This house has so much potential, but it may take time to realize it all.

But one of the best parts? We also have a really big guest house. Like, a two bathroom, three bedroom guesthouse. Perfect for volunteers, and guests, and even to sublet on occasion if we want. It's rather ideal. Of course, at present it's completely unfurnished, and also needs a sink or two installed plus screens, but soon. Soon. That's a Thailand soon, by the way, so any day now, give or take 6 months in either direction.


*****************
One year later, we have screens, though 2 screen doors need repairs already, we've installed showers and hot water heaters in the bathrooms, we cleaned and stocked the fish pond, much of the grime has been washed away, but not all, and there are still parts of the yard that have broken glass lying around. I got pregnant unexpectedly, shortly after we moved in, and there were many things that I wanted to do on this house, that I didn't have the energy to do. We'll finally plant flowers this rainy season I think, for example.

We pumped the water out of the flooded basement when rainy season ended and we've lined the leaky room with waterproof concrete. Now we wait for it to rain again to see if we fixed the problem, or if it will flood once more.

But it does feel like home. Baby Pax was born upstairs in this very house. We've settled in, and we don't plan to leave for a long, long time. The rest will come.
living in Thailand we like adventures