The Truth About Hiring House Help

July 20, 2017
She says she would like to talk to talk to me for a minute. She's pausing at the top of the dining room stairs, broom in hand, and she's smiling, but her expressive eyes show that the smile is a cover for her nervousness, her embarrassment.**

She just started working for me 2 months ago. I didn't want to hire her. I'm tired of teaching new house helpers the ways of western households. I'm tired of resorting things when they are put away wrong. I'm tired of the damage to clothes and appliances because they are learning, and don't understand what I say about separating colors and using bleach. They don't just leave the door open because they don't understand that it keeps out disease causing mosquitoes, but because culturally, a closed door is just an oddity. It keeps out good luck, and good neighbors.

I'm tired of mosquitoes in my house.

I'm tired of wet dishes being put away, and damp clothes folded and sorted into the wrong shelves in the wrong rooms.

I'm a recovering control freak. Having people in my house to clean 5 days a week, with barely any language in common, and no culture or customs in common, is my own personal crucible. Often I just pretend to myself that I don't care, and I don't pay attention, rather than facing the freak out that comes with everything being done wrong all the time.

"It's better done than not done," I remind myself. "And YOU didn't have to do it."

We keep hiring the best ones for other positions with our organization. Or I refer them out to other places in town. People know that working for me might mean a really good job placement later. There's nothing like observing how someone does mundane tasks day in and day out to help judge their character and intelligence. It's been a shock to discover that hiring house help is, in and of itself, a full time ministry career. 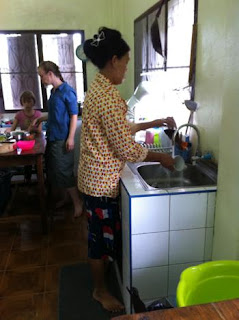 But the house helper I would have had take over on Fridays, for the woman who we finally hired full time to our family support team was going to have a baby soon. So I needed someone to take her Thursdays, and take Fridays.

Then she went down to only Fridays, because I promised the woman who does Thursdays that I would hold her job for her, when she came back from maternity leave. I will be the employer for women that I would want to have.

Today she's asking to talk to me, because I asked her to come work on Saturday. I have a house full of people this weekend, and I want the extra help.

She wants to know if she can come every Saturday. Do I need help?

"Where is your husband? Wasn't he sending money from working in Bangkok?" I manage this question with very bad grammar.

"He's gone to Myanmar, to go to Bible school. He's not sending money."

I have all sorts of thoughts about this, that I cannot express. My husband went to Bible school too, I want to tell her. But he never would have left his family unsupported to do it. He worked full time and took one class a semester at one point, because he's responsible like that. I don't know any of the words I would need to tell her that, and it probably wouldn't do any good anyway. She can't control what her husband does.

I don't have any other work for her. Everyone I know has house helpers they are happy with, or don't want one.

I tell her I don't have enough money to hire someone regularly for Saturdays too. I asked her to come on this Saturday because I know she needs the extra work. Thai minimum wage is $10/day. I pay an average of $200USD a month to have people come into my house and drive me crazy by doing everything differently than I would have them do it. At least at first.

It's only another $40 right? $40 for another day a week of having my floors magically swept and mopped while I'm doing other things. She's begging me to let her do it. But I don't have a spare $40 right now. I already spend a 5th of our monthly stipend on employing house helpers. I pay 300 baht per day. Thai minimum wage. Every time I go over our tiny budget again looking for extra where there is none, I fantasize about letting everyone go and having that money to spend on necessities again.

I haven't taken my kids to the dentist to get their collective 6 cavities filled for way too long, because it costs 500 baht each to get them done. That's 10 extra Saturdays of hiring extra help I don't really need because my children are quite capable of doing chores themselves, and they do them on weekends.

She's crying now, and my heart is squeezed, but I have no solutions right now.

I ask if she has rice to eat this week. She doesn't. She's been taking bags and bags of ripe mangoes and jack fruit home with her from our trees, and now I have an image of her and 2 small children in their bamboo house eating nothing but mango for dinner, again. But rice, I have. We have huge bags of rice piled up on the guest house porch to give away in weekly nutrition packages. We have other bags left over from conferences that we keep giving away where there is need.

We're rich. Not rich like you might think of being rich. But rich enough to have stacks and stacks of rice to give away.

I give her a bag. Tuck it into the basket of her bike. Tell her to tell me when that runs out and I'll give her another. She's begging me for work and I'm giving her a handout instead. I'm giving what I can, to keep her going until I can give her something better.

When someone overseas tells you they have house help, you probably imagine what I always imagined, what all housekeepers want. A more efficient and motivated version of themselves, who will do all the things they want done, the way they want it done, and give them extra time for other things. 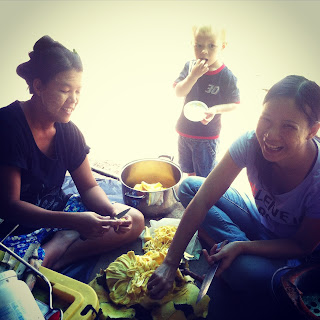 You probably don't imagine showing someone how to use a washing machine for the first time. The way they sit and watch it go around the first day, trying to figure out if there's anything they should do while it's running. You probably don't think about the times you have to repair it either, because they overload it, or let it get wet.

You probably don't imagine them tying all of your food tight in plastic bags and hanging it on hooks where it goes bad, because you didn't know it was there, instead of putting it in the fridge. But they've never had a fridge.

You probably don't realize that they have never scrubbed a wall or floor in their life, because their walls and floors are made of bamboo. Their houses have never stood long enough to need to be deep cleaned. They just build new floors and walls when they break.

You probably don't imagine the responsibility that comes with hiring someone, from their work permit status to their extended families, or how they view it as their job now, that they can give away to someone else when they leave, like their sister, or mother.

I finally put my foot down last month and said that I didn't want an untrained mother subbing for her trained daughter ever again. I told her to trade days with someone already trained who knows the job. Some people won't, or can't, learn.

You probably don't imagine that that someone will cry, because they are so nervous, when you ask them to please make sure things are dry before putting them away.

You don't imagine how attached you will get to some of them, how much a part of the family they become. 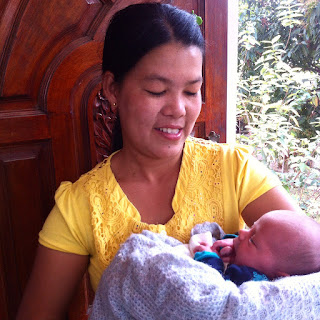 Or how your children get used to having someone around cleaning up and how you have to fight against their casual assumptions that someone else will pick it up for them. 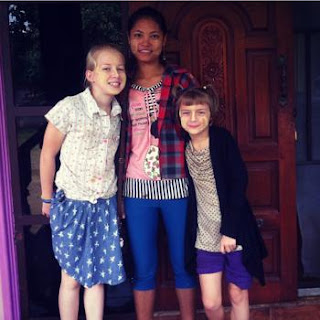 You don't imagine watching someone cry as she asks for another day, because her husband is gone, again, and this time he isn't sending any money.

You can't imagine being desperate enough that $10 will make or break you.

You have no idea the amount of work it takes to not have to do housework.

But I'm trying to paint you a picture. 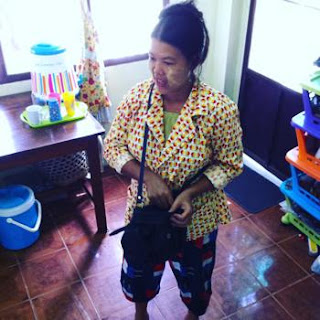 **None of these pictures show the woman in this story. I wouldn't embarrass her like that. These are old pictures. The woman in most of these has gone onto being a key person on our Charis team since the days she used to work for me. I miss having her around.
cross cultural friendships on being a recovering control freak this life together thing