Lost in the Woods 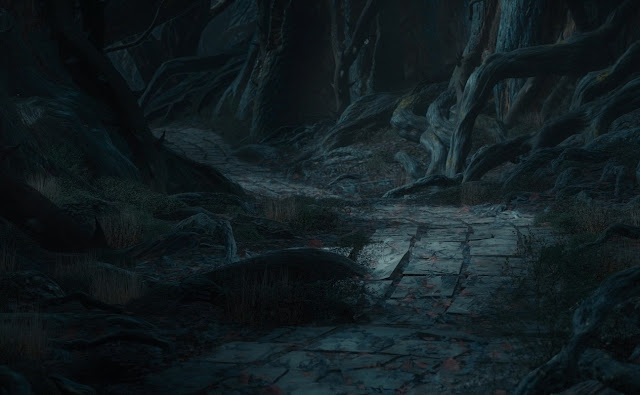 The past 3 years have been witness to a slow forgetting of who I am. Or maybe more accurately, who I wanted to be, and what I knew about how to get there.

I used to write, here, about the stories we tell ourselves. How our narrative shapes our experience of events. How we act out of the idea we have of ourselves in relation to the events unfolding around ourselves.

I don't know how to describe what happened next, what made me forget, in terms other than, I got tired. No, not just tired, bone crushingly weary, and I had no hope that it would end. That was what undid me. I somehow stopped believing that my difficulties would ever end and that I would find my way to the other side of them. There were things happening to me that I didn't choose and I felt out of control and helpless because of it.

Perhaps it was just that there was so much to deal with at once and I was overwhelmed. I was overwhelmed, that is true. I suppose you could call this loss of hope depression, and it would be accurate I think.

I was at the place in my story where I wandered some deep forest or marsh and began to be afraid that it would never end, that I would always be putting one foot in front of the other and the scenery would never change. I began to forget that there was anything other than the forest anywhere. I had always been locked in this never ending toil, traveling in circles past trees that all looked the same.

Some of my traveling companions had already turned back, or turned aside, and their loss hurt me more than I would admit. I felt abandoned by them.

I was convinced that my efforts were fruitless. So why keep trying? I was convinced that I had no real skills or abilities. I was an imposter. My presence on this journey was a big mistake. I was sure that those who journeyed with me were better off without my help. My limping, directionless progress was only holding them back. It would be better for all concerned if everyone continued on without me. My role in the story had been to come this far, to help the group get this far, and now I was extraneous.

I believed this, all of it. It was the story in my head.

It also didn't occur to me to ask for help from anyone traveling with me. That's not something I'm good at. Also, I'm not worthy of help. I don't belong there anyway. Helping me will just slow people down. I played it like that guy in a movie who doesn't tell anyone he's been wounded, or bitten, or whatever, until he's almost dead, and it's way too late to help him. But he knows he's gonna be left on the side of the road at some point anyway, so why not now? It would be a relief to not have to go on.

I didn't care about the quest anymore. All I wanted to do was find a place where I could sleep, and sleep, and sleep some more, and never get up again. I would have curled at the base of one of those middle earth trees and let it lull me into a dreamless slumber while slowly burying me underground.

I shrank my life down as much as possible. I dropped the things I was carrying.

Some of this was good. I had been doing too many things, many of which another person could do much much better. But it wasn't like I was proactive about it. I waited for people to notice me dropping things along the way to redistribute the weight, rather than ask someone to take things from me before any damage was done. (Part of this may have been because I had tried asking some people to help me carry things before, and they had either said they would and didn't, though I'm not sure I actually let go of my end very well, or they said that they didn't like the thing I had to carry, and they would rather not, it wasn't an exciting enough object.)

I simultaneously felt like I was stuck carrying heavy things forever, and like I was the absolute worst person to be trusted to do it. I waited for someone to say what I knew, "You don't belong here. We don't need you. Go away." I thought I wanted that to happen so I could stop.

If you saw me during this time, you wouldn't have known I had this going on inside me.

I faked being ok. I listened to other people's stories. I never told mine. I deflected. I was just tired, or sick, or both. Because I was, physically and mentally. The hidden wound festered, and the fact that no one noticed it was proof that I ought to deal with it alone. I told people about how well my fellow travelers were doing, but never about the festering rot inside of me.

Eventually I stopped being able to tell any stories at all, even important ones. Which isn't very great when one of your main jobs is to be a story teller.

I don't know how to end this story, because it's not over. I feel like I'm still in the woods, but I'm consulting a map to find a way through for the first time in a long while. Or I've climbed a tall tree to have a look around. I've somehow remembered that there was a reason for entering the forest in the first place, and that I'm capable of making difficult journeys. I've done it before. I've started to believe that I can do it again. I've remembered that many stories have a forest like the one I'm in, but they don't end there.

Telling this part of my story is a step toward rebuilding the strength I need to see this journey through. I hope it is.

******************
If you're my friend in real life and I didn't tell you about this, please don't feel bad. I didn't tell anyone. I didn't even have words to explain it to myself. This is only my second or third attempt to articulate the mess inside of me. Writing is easier than talking.

I've come to realize, in the past week or two, that I've been chronically sleep deprived for a really long time. Between co sleeping with babies, taking care of little kids, who often wake up in the night, a husband who's often insomniac, a restless sleeper, and a night owl, and my own bad choices about when I go to bed, I haven't been well rested for a very long time. It's rare for me to wake up and feel like I've had enough rest. I think I need more sleep than most people do. Or I need more hours in bed to make up for the constant interruption of my sleep cycles. In the past 2 weeks I've been in bed at least 8.5 hours. (Though not uninterrupted because my 4 year old has weird night fears that bring him stomping into my room in the middle of the night, and my 2 year old still wakes up to nurse at least twice.) But just that has made me feel more like I can handle my life. I feel some creativity returning to my mind, and some order.

I've started talking to a counselor. She recommended a podcast about how the body stores trauma. Probably the most immediately interesting thing, to me, that the researcher mentioned was about how "the natural way that we deal with difficult stuff is we go to sleep and we dream, and the next day we feel better." There was more about REM sleep and integrating traumatic memories and stuff too. But all I've wanted to do for a very long time is sleep, sleep until I don't feel tired anymore. But part of me felt like I shouldn't do that. I should be working. So I kept myself awake. But it was the opposite of productive useful time management. I wasn't able to do anything well at all.

I used to take naps. Back in the US I coped with my life as a mom of many and the work I did by working late, but usually laying down in the afternoon to rest while the kids were resting. I'd stopped doing that here, mostly because it's so hot in the middle of the day in my room that it's a miserable place to rest. But I kept trying to stay up as late and get work done and couldn't figure out why I couldn't pull it off any more.

Anyway, here's to sleep, remembering important things, and other steps toward health.

personal growth story of my life