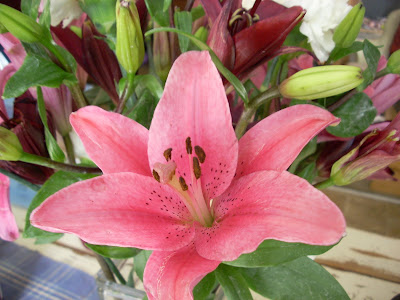 One of the hardest things about the past month was dealing, not only with the loss of a baby, but with the truth that we aren't going to try and have another one again any time soon. That was perhaps much harder than the initial loss.

Yet, as Aaron reminded me every time I went off on a tangent, forgetting our reasons, we have very good reasons. (Those lilies above came home with him one night after such a conversation.)

As it stands right now, I do most of the work for The Charis Project. Aaron can't do it all and work long physically demanding hours to support us at the same time. Though he does do a lot. We have to assume that another pregnancy would be as debilitating as all of the previous ones have been, which means I am barely able to function for several months. We can't afford for me to take a leave of absence right now. At least 35 kids are depending on us right now. If I stop working they go hungry. It's that simple.

How selfish would it be then to choose a pregnancy right now, when things are are so unstable for them?

I'll be honest though, for the first time this last month I started to resent it. It was no longer a privilege to get to help someone in such a meaningful way. I wanted to quit. I was angry that I couldn't quit, or that my conscience wouldn't let me. I wanted someone else to come and do it for me.

But then I remembered all those times when I was home with two very little ones and I would cry I was so frustrated. I loved being with them, most of the time. But I would read and hear about children starving and suffering in other parts of the world and I would feel that just taking care of my own middle class, healthy, and happy children was not enough. I wanted to do more.

I was discontent and constantly trying to figure out what I could do. Gradually I learned to accept the season of life that I was in, and I embraced it. I realized that it wasn't forever and I learned to be content raising my own children.

Now I have what I longed for then, and I was wanting to just go back to that season of "just" being a mother again.

Then, I laughed at myself and wondered if I would ever learn to be content with where I am.

I'm closer this week than last.
personal growth story of my life The I'm not perfect club