A quick way to a meaningful advent calendar

December 01, 2010
My kids are always asking me to buy them an advent calendar. I never want to because I detest the pictures on them. They are garish one, and two, they have nothing to do with advent! If you aren't spending the days before Christmas looking forward to the coming of Christ, than it's not really advent, it's just... I don't know, counting days.

This year I had an idea, which I just finished executing and I will share it with you in case anyone else out there is a last minuter like myself.

I bought the cheap paper advent calendar. $0.99 at Trader Joe's to be exact. 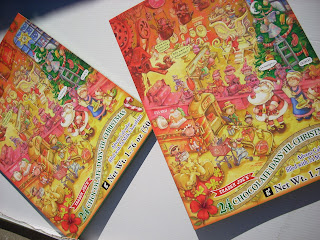 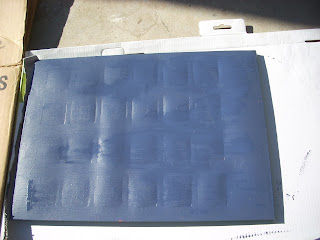 Then I got out some paint I had on hand. I decided to go with a dark background because I wanted to focus on the light into darkness theme, and because it would take less coats to cover over the picture that was there. Just brush on some paint until it's all covered . This took less than 10 minutes. You can see  all the pop out doors now. 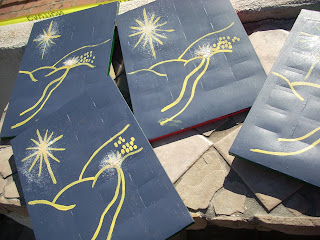 Once that dried, I plotted my picture. It needed to be simple and easy to draw because I was doing it 4 times. Don't spend a lot of time on this, they are, after all, going to be systematically torn open by your kids for the next 25 days. 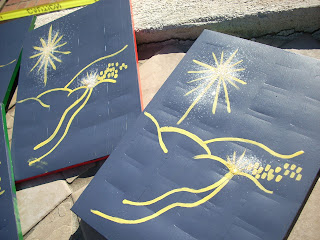 I had paint so I used that. A silver sharpie marker would have been perfect, but I didn't have one. when the paint was still wet I sprinkled glitter over the star and the place where the road ends. I sure hope you can tell that it is supposed to be Bethlehem and the light coming into the world at the end of a journey. (My kids will believe it when I tell them that's what it is and that's what matters. :) 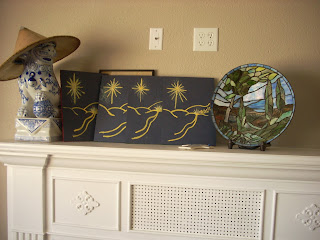 And there you have it, advent calendars that remind us what it's all about, in less than an hour.
I like to make stuff