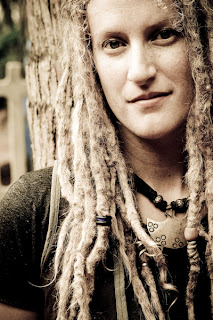 Rachel Devenish Ford and I traveled in overlapping circles for a few years before we actually met. I knew who she was long before she knew me, I think. She has a kind of presence, a look, a quiet, graceful way of moving through a crowd that makes you stop and watch her, just because.

That of course will embarrass her to read because she's quite shy and introverted and often wishes she was invisible. She will probably flatly deny that she is graceful, but she is one of the most graceful women I know all the way through. She is also the reason Aaron and I found ourselves all alone in the middle of the desert within a week of meeting each other.
You can tell by the way she writes how carefully she observes people. She knew, before I did really, that it was important for Aaron and I to have some time together for a while.

Yesterday I read her debut novel, The Eve Tree, in a single sitting because I couldn't put it down.

It is about Molly and Jack, and their grown children, Molly's mother Catherine, and her mother. It's about how we get tied to a place where we birth and are birthed and how it forms us. It's about mothers and daughters and how mothers shape who we are and yet can't shape who we are at the same time. It's about blame and responsibility and finding peace. Oh, and there is a fire in there too, threatening to burn everything to the ground.

Somewhere in the middle of this book I wondered if anyone who didn't already love Rae with such devotion would respond to the book the same way as I was, because every word and every line oozes with her personality. A few pages later I realized it didn't matter. If you don't already know and love Rae you will by the time you finish her book, at least the part of her that you now know through her characters.

What strikes me most is how I fell in love with her characters. They are deeply flawed, broken, and hurting, often irritating. If I knew some of them in real life I would probably be impatient with them. But Rae shows their humanity with such compassion and love that I see them through her lens of grace, and the beauty strength and resilience that are just as possible. I couldn't help but love them all the same way Rae loves, and the way she has always shown me that God loves, unconditionally.

I care about Molly and her breaking, even though she's often foolish. I want her to be whole, just as Jack does.

I see myself in Catherine, and in the ways I relate to my own daughter who is cut from such different cloth from me. I'm enchanted by the way she writes a male character with such a sure hand, never missing a note, the tone so consistent and believable.

I had the urge to get out a highlighter and just color lines that I especially liked, turns of phrase and descriptions that the writer part of my brain kept noting as particularly skillful even while the reader in me was simply swept along by it.

The description of of a little girl heaping flowers around her dying father's pillow undid me, and the way she needed to make space for her mother on the bed.

I sobbed through the last 3 chapters at least.

Molly's journey is one that I think a lot of women from our generation have taken, or need to take and this story is true in so many ways that it points the way toward healing for all of us. It is a masterfully told story, unfolding slowly, layer by layer, working down to the rawest and deepest parts and drawing the reader in almost imperceptibly until they are caught, surprised by how much they care.

I have a few books that I hold onto and read again year, after year, after year. The Eve Tree is going on my bookshelf next to them. I already want to start at the beginning again.

To read her blog go here.

To find her on facebook go here.
recommended reading