My Grandpa's Thoughts on War

November 11, 2011
My grandpa is  WW II veteran. His whole life he's written poems and several years ago he self published a book of them. (Back before it was easy and cool to do so.) 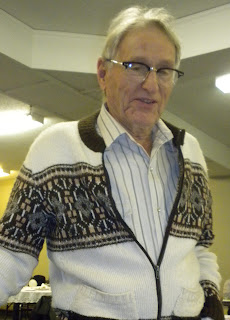 In honor of today, here's one of his poems.

(Excerpt from My Thoughts in Rhyme by Joseph H. Young A Soldier and Farmer)

In Flanders field's, among the slain,
We who survived, came home again,
(Our father's fought for Freedom there
The world no longer seemed to care;)
Their sacrifice, was it in vain?

I'm home once more, I did not die
Among red poppies, 'neath blue sky:
But there amidst the ripening wheat
Where poppies bloom in summer's heat,
Some comrades sleep, and larks still fly.

Some folks will never understand,
They have not seen blood reddened sand,
But I saw thing no one should see,
I can't forget, they stay with me;
Those scenes from war torn land.

The battle's o'er, they say we won,
What's that to those who lost a son,
His father's pride, his mother's joy,
He was a man, while still a boy;
Just one more cross in Flanders fields
poetry recommended reading