March 28, 2013
So we made it. It was pretty uneventful. No children were lost in transit, or bags, so it was a pretty successful trip.

Of course, that's never the whole story, because every trip has it's happenings, but it's a good place to start.

For instance, Little, who inherited my hypoglycemia, didn't eat any of the food she was given the morning of our departure because her tummy was already in knots, so she ended up vomiting on herself in the car on the way to the airport. So there was that, a wardrobe change as soon as we arrived. Plus, we had a ton of luggage, and it seemed every elevator at LAX was closed for maintenance. We ended up in a completely different terminal just to get to the right level before walking back to the terminal we were supposed to be in. That was fun.

What followed was a lot of waiting. Which was the same everywhere. A group our size, with as much stuff as we had, meant we stood for what felt like a very long time while 3 or more people from the airline rushed around behind the counter and processed everything for us, or the immigration person processed our paper work, etc. I wasn't about to rush them. Better to let them figure it all out and make sure there were no mistakes so everything made it on the plane. Even if that meant asking the manager several questions at a time. I signed many waivers regarding my condition and flying.

The stewardesses on our first flight to Shanghai gave me slippers and eye mask and toothbrush once they noticed I was pregnant. I was really grateful for the slippers. I was also glad to be close to the galley because they didn't give me nearly enough water at first and I got some very painful muscle cramps so I resorted to helping myself and filling up my bottle whenever it was empty. I must have finished at least 15 bottles of water on that flight. But, no more cramping. Also, it was a handy place to stretch out and move around.

Shanghai was a horribly depressing airport, with cigarette smoke from the wide open smoking lounge door filling the gate where we waited. The flight wasn't much better, with rude passengers, lazy stewardesses and the heat on full blast for 4 straight hours. I don't recommend Shanghai Air.

And then we walked out into the wall of hot humid air in Bangkok, at 12:30am local time, and for the first time I thought to myself, "Good God, what have I done?"

Of course, we were all a little sleep deprived by then.

But the Bangkok airport, especially after Shanghai, makes capitalism look really, really good. Bright, clean, beautiful and huge. Not bad for a place that is a borderline 3rd world country still.

I was surprised by how some people had no problem budding in line in front of us going through immigration. They weren't Thai, but I'm used to the US and the way people at least pretend to be polite like that in such situations. I had to get vigilant about our spot.

I was also surprised, forgetting I suppose that it was 2:30 in the morning, by the guy at the airport food court, which was an amazing place full of good food for really cheap, who told me he wouldn't serve me because he was taking a nap. He was just sitting leaning on a mini fridge sleeping with the stall wide open. SO not something that would happen in the US.

Then I cried because my kids refused to lie down and try to sleep during the early morning hours before we boarded our 8am flight to Chiang Mai and I didn't feel like I could lay down and rest until they did. But then I had a sane moment, an hour or 2 later, after I looked in a bathroom mirror and saw my ankles had swelled to the size of grapefruits, when I remembered that I had 2 fabulous helpers on this trip, who had actually slept on the last flight from Shanghai, and laid down on a bench and slept anyway and let them watch my kids. It was way better than nothing. 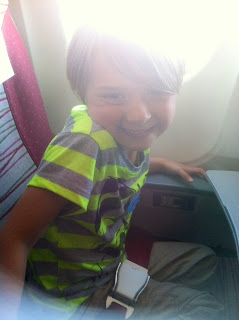 Bangkok Airways was a lovely way to conclude our air travel, with the biggest seats of the whole trip, and an nearly empty plane and stewardesses who spent all their time smiling at BamBam and entertaining him. Every kid got a window seat, Little finally got to sit next to me and was adorable the entire trip and we were there.

I was expecting to see Adam, and Cindy and Prang, or some variation thereof when we landed. But JourneyMama standing there with her baby was a wonderful surprise and I for sure cried, and just barely avoided a huge ugly cry. She's had 2 babies since I saw her last, that's how long it's been, and she made the 3 hour trip from where she lives into Chiang Mai in order to be there to greet us.

It's been hot, but not horribly so. The nights get cool. The kids have woken around 4 am each day and taken a long time to go back to sleep thanks to jet lag, but they are adapting amazingly well. They are such good travelers. I was surprised how well they handled everything, and with what good spirits.

We really are blessed to have the loveliest place to land, with family and friends and a comfortable house to stay in. I started making Prang let me help and do things because I need to find my way around her kitchen before she goes back up to the village next week. But I'm letting her cook, for now, (I say that like I have a choice about it) because her cooking is amazing, and the style and ingredients so different from what I'm used to that I really don't know what to do with a lot of the food in the fridge. I haven't recognized at least half of the vegetables that show up in our meals every day.


Some of you may be interested to learn that breakfast is just another meal. This morning it was chicken, rice, a green squash like vegetable stir fried with tomatoes and egg, and a chili sauce with fish in it. All very tasty, and totally more like dinner to me. Often it is just leftover dinner for breakfast. We breakfast on the porch while it is still cool outside, and by noon all the kids go inside because it's so hot.

The one thing I miss is tea. I know it's available, I just can't find any in Prang's kitchen. Tonight she is going to show me the market and I will start to find my way around town.

Before I drive anywhere I need to get used to the fact that everything is backwards, and get a driver's license, though they tell me no one here cares if I have one or not. They drive on the left side of the road here, and the driver's seat is on the right, and all the way back from the airport I couldn't shake the feeling that Cindy was turning into the wrong lane.

So the adventure continues. But after the momentous effort of just getting here, the rest seems pretty doable right now.

Thanks for all your prayers and love as we made our journey.
thailand we like adventures