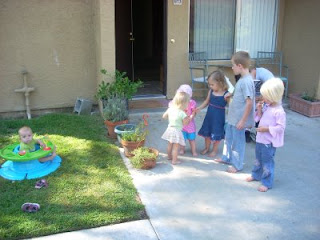 Today I had two neighbor kids drop by with their mom so I could cut their hair. (They tried to do it on their own at first you see. It needed some evening out.) So while my kids raced around outside I trimmed hair on the front patio, while keeping an eye on them and the extra children running in and out the front door.

An hour later a toddler pushed her way into the not quite shut tight front door and looked around big eyed, wondering where Little was. Since I had just banished Little to quiet time I shooed her, and the 3 year old with her, back to their moms on the playground nearby.

An hour after that, while I chatted with Aaron on facebook for a few minutes, fielded a phone call, baked cookies, and started dinner, neighbor children and their parents came in and out countless times, the parents to chat, the kids to find more toys to pull out and play with, or to look for a friend, ask for water, and once use the potty. Little chased the Girl screeching all around the playground because she wanted to ride on the back fender of her bike, which was not going to happen, and I got hugs from all sorts of kids not my own.

On any given day that it isn't raining or freezing cold, this is typical. Half the neighborhood is in my house.

May I tell you a secret?

I'm an introvert. I could not have done this 4 years ago.

I'm not shy. I like people, but I really need quiet spaces to be refreshed. People are draining, especially when I am low on reserves.

When we first moved to California, the occasion of Aaron's family dropping in unexpected was cause for near hyperventilation, and perhaps a quick cry while hiding in the bathroom. Granted, there are many of them, and our apartment is less than 1000 square feet. So the presence of 6 extra people of any size all talking was a significantly crowded experience.

But I love them. I didn't want to be inhospitable, especially considering how often they put up with us, so I breathed deep and tried not to freak out. They started to call first and give warning, sensing my freak outs, and it got easier to have them drop by. It got to be enjoyable actually.

Then there is Aaron. Ever the extrovert, his was a doors and windows wide type of approach to life. I wanted it firmly shut, to close everything out. (I'd never lived somewhere warm enough for it to be possible either.) He wanted to let it all in. So I breathed deep, and didn't close us in sometimes, and it got easier. And then we moved to our current location, right next to the playground, where everyone passes to get their mail, go to the pool, play, and barbeque. From our chairs out front we said hi, and met them all. The kids started coming, and parents, and more kids, and kids whose parents I never met and my heart broke for them, and their hunger to go where there was someone home that cared and I opened wide my doors and let them in. I taught them to play piano. I answered their nosy questions. I fed them when their parents still weren't home at dinner time and I walked them home in the dark because they were scared. I grieved to wonder what their homes were like when they stood in the doorway of mine, furnished with cast off furniture often covered in folded laundry with toys strewn across the floor and said, "Wow, your house is really nice."

Then there were the newly single moms figuring out how to make it in a tiny new apartment and needed an ear and a friend. There were the military wives juggling children around the crazy schedules their husbands had and sometimes deployment. Some are still best friends, some I never heard from after they moved away. Some I could lean on, as much as they leaned on me, others only had need, and I gave.

I have stories I haven't told here, of abuse and addiction and people who needed help in the middle of the night and knew that here was safe when they needed some place that was. Others of loneliness and frayed ropes, and people hanging on by clawing fingernails that needed someone to listen.

There was the old man carrying oxygen that smiled and said hello to all the congregated kids every day as he headed to the mailbox who ended up joining us with his wife for dinner one New Years Day. Or the other neighbors we've befriended over the years.

I have tried, countless times, to schedule things with these neighbors of mine. "Come over at 3pm and we'll sit and have tea together while the kids play." It doesn't work like that. Much as I would prefer it that way. I like these things to be planned in advance.

But my door is always open, out of necessity if nothing else, I have to hear my kids as they play. If they come it will be because of the open door and the child leading them, and I'm usually happy to have them drop in like that.

Somewhere along the way I noticed that the aching loneliness I started out with in this place has evaporated. There are too many people to love to have time to feel lonely.

That's what it is that compelled me so far out of my comfort zone by the way, love. As long as I kept my door shut I didn't know these stories, I couldn't see the hurt and the need and the posibilities. But once I knew, how could I not respond? Even thought it made me uncomfortable, and ruined my afternoon schedule.

Once I stopped thinking about myself and my comfort, and looked at the people around me, it got easier to let them in.

In a way this blog is the online version of that. Through the years as I've recorded bits of my real life journey here, I've gradually gained the courage to let you guys further in, to share more of my real self in this space, and to be more vulnerable. I couldn't have done that to begin with either.

There are a lot of people out there that need someone to love them. I suspect that there are probably enough people around to fill that need. I think that even more often, that person is you, and me. If we could just see past our own fear and discomfort long enough to notice, what would change? Maybe a lot of things, but most surprisingly, ourselves.
this life together thing