January 17, 2013
So the girls changed their minds several times about a party theme this year. They couldn't agree on anything you see. So 8 days before the weekend I had invited all their guests we were split down the middle between the Girl wanting it to be a Brave themed party, mostly because the shocking lack of any archery at the Boy's Hobbit party was extremely disappointing to her, most of the boys being more into sword fighting. For her the most important part was that we had bows and arrows to shoot. Sophia was not so sure about about a Brave theme, she just wanted a cake and to have all her friends come and play hopscotch with her. So I was planning a mix of both, to make them happy. Five days before their party was to happen they both came running to me with great urgency. "We want a Narnia party!" They both yelled it, so excited were they. "That would be so cool."


It was a great idea. A little short notice, but a great idea. I of course tweeted about it and one friend started telling me all about the Narnia party she had for her son a few years back with some really great ideas. If only I actually had time to put it all together.

Well, as luck would have it the girls had been horribly sick with fevers and coughs and congestion and they just weren't getting better, at least not fast enough to not infect all their friends, and then BamBam started showing symptoms. So I made an executive decision. We postponed their party 2 weeks, until after Christmas, when their daddy and big brother would be back from Thailand, and we would have time to do a party properly. I have to start by saying that there is no way these parties this year could have happened without my in laws. Their property is perfect for staging epic adventure parties, not to mention all the work they do with setting up and making the party work, and clean up afterwards. They are the best.


So, with time to think about it, a plan started to come together. We would have bows and arrows, obviously. Aaron found this youtube channel where this guy make bows and arrows out of PVC pipe. Down here, where fresh springy branches for wood bows are kind of in short supply, this was going to be our best building material. My little brother in law Alex, figured out how to make the bows and arrows so they actually worked. Which was awesome. Now we needed to fit them into the story somehow. The rest was easy. A scavenger hunt, in the form of a quest. We borrowed from any of the books that suited our purpose, and we just looked around the property for things that already existed that could become places in a story.


Then I constructed a quest and put the 6 different clues in a fancy font that my SIL Ana then printed and made to look like antique scrolls. King Tirian of course was Alex, and he taught all the kids to make bows and arrows. While they were busy doing that Haven, aka the White Witch, tempted away as many children as she could, especially the small ones, with candy, and coloring, and she had them make crowns and promised they could all be queen's like her if they stayed with her. She was very convincing. This set the rest of the children on a quest to become strong enough to defeat the White Witch and get their siblings back. Along the way they had to practice their archery, follow the signs that Puddleglum gave them, find the sword of Aslan and then confront her with it. Our good friends Landis and Suzy brought a few of their real bows and taught the kids to shoot them  at Aslan's How. There was a stop for refreshments at Dryad's Hollow. Next, to Puddleglum's hut in the Marshes. Where they received 4 signs that would guide them to the sword of Aslan. Auntie Ana called dibs on playing PuddleGlum. You can see her later on with the kids when they confront the White Witch. The cleverly hidden sword of Aslan. And then the celebrating began. I was so glad Brenda was taking pictures. Because hers are usually better than mine, and she got things I would have missed. Most of the rest of these, and a few prior are hers.

I did not get as much food prep done as I wanted to before the party started. Thank God for friends who jump in and help get it all out to the "starving masses" before they grow too restless. Brenda says she loved this part with all the bustle and the maidens carrying food to the castle. 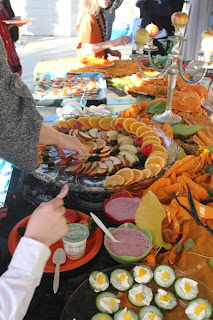 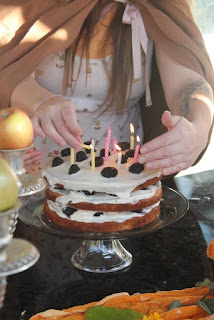 It was a lot of fun to do. I think the kids had fun too. One little girl had so much fun she told her mom, "This is the best birthday party I have ever been to." Misson accomplished. Fun had. Quest fulfilled.
we like adventures we're having a party